"It is all going to be in the hands of insurance people now. Everything in the kitchen is broken. All mechanics, electrics of fridges freezers are all damaged" 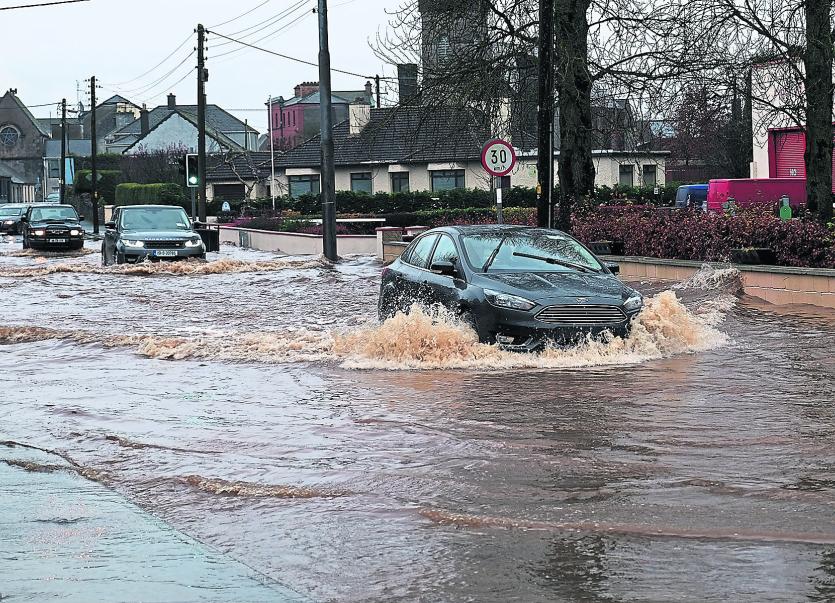 Flooding on the N80 in Irishtown, Mountmellick. Picture by Paul Lalor.

Fourteen members of staff and the owners of The Hare’s Corner in Mountmellick are now unemployed after the building was badly damaged by flooding that hit the town on November 22.

Owner of The Hare's Corner, Declan Furlong, praised the staff who have worked tirelessly to help clean out the damage after they were struck by unexpected unemployment one month before Christmas.

“Our staff are coming back from signing on in Portarlington to help with the last of the clean up in the place.

“Staff are on the dole, I am unemployed, everybody is unemployed there is going to be no income in what was going to be the busiest time of the year.

“A lot of people depended on us and we depended on everybody and it is very unfortunate,” Declan Furlong said.

The Hare's Corner celebrated its first birthday on the premises just one week before three feet of water gushed into the restaurant destroying everything in its path.

"The river broke its banks and water swept in from everywhere, front door, everywhere. We had to evacuate 20 or 30 customers and eight staff working at the time,” he said.

The restaurant is now closed until further notice as the damage is assessed. Declan told the Leinster Express about the devastating affect this has had on the business which they have worked so hard to build up all year.

“We are open one year and after a years trading we are finally able to compare something to something else, month to month and having got the trust and gained the reputation over the past year Christmas was going to be a real springboard to start off the new year and generate some good revenue for ourselves, all of this has been cancelled,” he said.

The Hare's Corner is one of many buildings at the Mountmellick Development Association at Irishtown, Mountmellick that was hit by flooding when the nearby Owenass River burst its banks.

"It is all going to be in the hands of insurance people now. Everything in the kitchen is broken. All mechanics, electrics of fridges freezers are all damaged," Declan added.

Many businesses in the town experienced flood damage but have since been able to re-open their doors.

Sonas creche is beside The Hare's Corner and also remains closed.

Tusla to give go-ahead on temporary creche after Mountmellick flood destruction.

Mountmellick photographer Paul Lalor was on the scene of the Sonas community creche evacuation.