The first beet factory in Ireland was in Laois in 1851 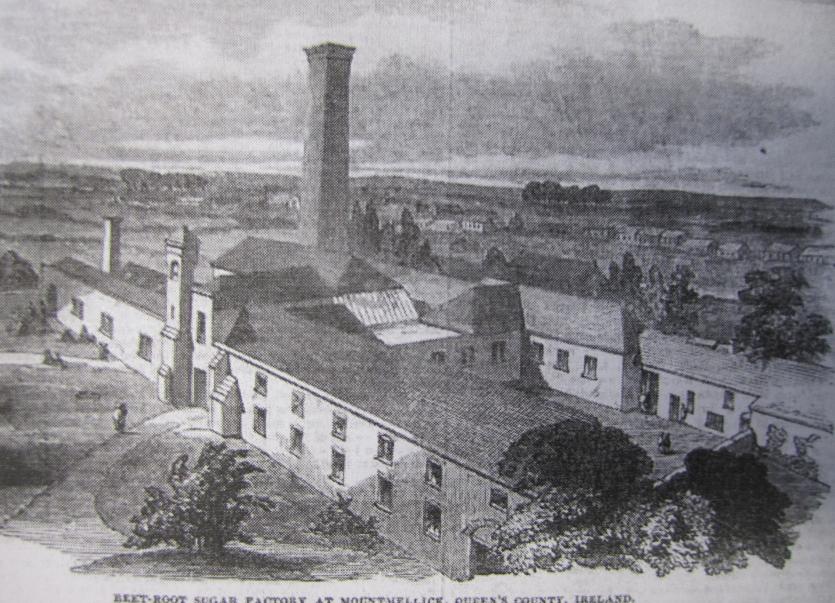 The Irish sugar beet industry was one of the great economic success stories in this country since independence was declared in 1922. It was the one of the biggest and most reliable income earners for farmers throughout the country and provided lucrative employment for thousands of workers over an eighty year period.

It was a crop that was suited to the Irish climate and the Irish soil, it helped keep the countryside alive and its spinoffs helped the local businesses in towns and villages as well as boosting the fortunes of suppliers of goods and transport. It also helped the balance of payments by producing a product that otherwise had to be imported.

The infant state was only four years in existence when the first sugar company factory was opened in Carlow in 1926. It was followed by other factories established at Mallow, Thurles and Tuam. These towns became magnets for employment and while a big part of this was seasonal, there was also a huge full-time staff engaged by the sugar company. Everyone seemed a winner but due to some largely unexplained connivance between the government, the EU and big business, production of sugar beet ceased in this country in 2006.

For most people the history of sugar beet in Ireland began in 1926 with the opening of that first factory in Carlow but the reality is that the history of the industry in this country goes back much further than that and that Laois was the centre of it.

Ireland’s first beet factory, indeed, dates to the mid-19 century and was established in Mountmellick, which was known as the Manchester of the midlands because of the amount of industrial enterprises that existed there.

Up to that period European countries got their sugar from sugar cane imported from the West Indies and Central America which was refined here in this part of the world. The sugar cane industry was dependent on slave labour. There was a growing public outcry against this inhuman exploitation and the anti-slavery lobby eventually held sway and the evil trade was eventually outlawed in western society.

This was a major incentive for the production of sugar in countries on this side of the Atlantic. The uncertainty of supply because of naval wars and blockades also compelled European countries to look to their own resources for a substitute. Research and experiments were carried out in continental Europe, particularly in France where it was found that it was possible to extract sugar from the beet crop on an economic basis.

The Leinster Express kept a close eye on the opportunities presented by this new tillage crop. The first article I found was dated 23 September 1843. It quotes a letter from a “very intelligent correspondent” who revealed he was a former distiller but who remained unnamed.

“The numerous distilleries which have either fallen into decay or become comparatively idle (because of the success of the temperance movement) could be converted into sugar manufactories and in the cultivation of beet root, for which our soil in peculiarly adapted.” The correspondent told of the success of the industry in France on the one side and the Parliamentary Leviathan, the West India slave-trade interests in parliament which were blocking any attempts to foster this home industry, on the other.

Prof. William K. Sullivan of Queen’s University, Cork, made a detailed study of the sugar industry on the continent. In his booklet, “The manufacture of Beet-Root sugar in Ireland”, published in 1851, he argued convincingly that our soil, climate and rainfall were ideally suited to the growing of the beet root and that it gave a more profitable return than mangles or turnips as well as being an ideal rotation crop.

It is not clear why Mountmellick was chosen for the factory but, it seems likely, it was because of the big Quaker colony that had settled in this region and had been active in creating so many viable and progressive industrial enterprises here. The factory cost £10,000 to convert, extend and equip and 160 persons were employed there. The Company raised capital of £120,000 with a further facility up to £300,000.

Two brothers, Daniel and William Hirsch, were brought from Vienna to lend their expertise in the setting up of the factory. There were, unsurprisingly, difficulties experienced by farmers and by the factory in the first year of production. It was a new crop after all and there were teething troubles in the harvesting, the transporting, the converted machinery and buildings and in the production process.

The hitches in the first year were understandable but by year two things had, apparently, improved. A Leinster Express article of 5 March 1853 stated “we are happy that the affairs of the Company appear to be such as to encourage an extension of their operations and that there was every prospect of factories being opened at Cork and Belfast and that the success story was mostly attributable to the Messrs Hirsch”.

But there was a different outlook by the following year. A Leinster Express article of January 14, 1854, revealed the disappointment caused by the neglect of many farmers in the Mountmellick area “to plant and supply the requisite number of roots”. This led to a shortage in supply which affected production and consequent sales of the sugar.

But far worse news came the following month when it became known that there was “considerable” trouble between the Hirsch brothers and the Company. The brothers had been sacked and local people were very annoyed at this. The Company also drew forth the wrath of Chief Justice Monaghan who heard the Hirsch brothers’ appeal. He said that the Company presented “one of the most scandalous defences that have ever been pleaded”.

The Leinster Express of 10 March 1855, announced that an agreement had been reached whereby the factory was placed under the joint superintendence of William Dargan and John George Adair.

John George Adair, Bellegrove, Ballybrittas, is better known as “Black Jack” Adair, one of the most infamous Irishmen of the 19th century. Like Dargan, he had strong Laois connections. But that’s where the similarities end. History has him branded as a notorious tyrant, never to be forgiven for his appalling record of evictions, the most notable of which was at his extensive property at Glenveigh in the Donegal highlands. Dargan on the other hand was a man of honour, dedicated to helping to get the country up off its knees during and in the wake of the Great Famine. He was the builder of a thousand miles of railway track and at one time employed as many as 50,000 men in his enterprises.

Fate brought these two men of very different dispositions together in the Mountmellick sugar beet venture but it is difficult to see how these two men, with polarised outlooks on life, could possibly work together in harmony. And it is unlikely that they did. The Mountmellick factory struggled on for a few more years producing sugar on a small scale but it soon gave up the ghost.

So the beet industry in Mountmellick opened with great promise, flourished for a few years – but was dead within a decade.  A number of reasons for its failure have been put forward but perhaps the biggest factor was the British Government’s determination to shelter their own new sugar beet industry, which was built up on the strength of the Mountmellick experiment.

Mountmellick TC proposed that a new sugar factory be built in Mountmellick in 1949 either as a replacement for the Tuam factory which was in danger of closing or as a fifth factory. They made a convincing case for Mountmellick with good transport links of road, rail and canal (at the time) and a location right in the midst of a big farming sugar beet producing community and hinterland. But this time there were no takers.

There have been attempts in recent years to resurrect the industry in Ireland and some influential names are involved. But it is a case of wait and see what the future holds for another Irish sugar beet industry.