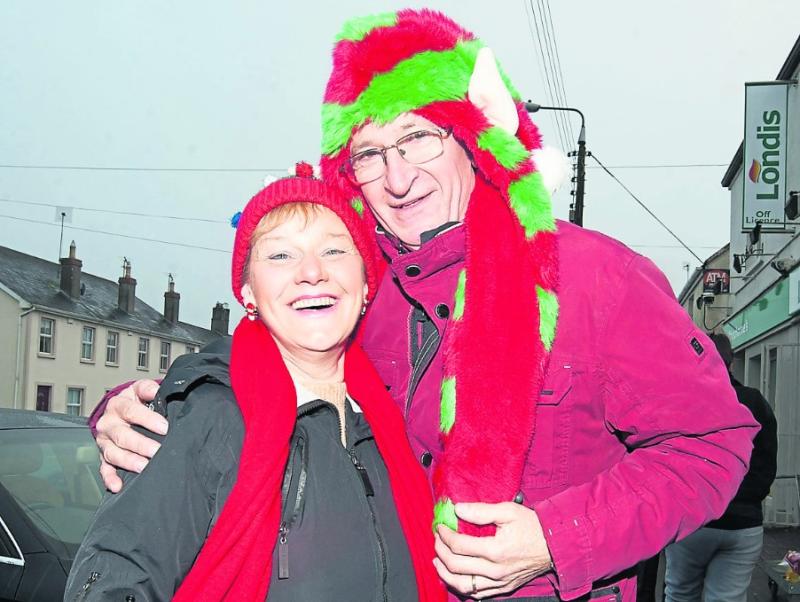 Janet and Philip Stewart in the festive spirit and ready for the 5k run at Mountmellick in November 2017. Photo Denis Byrne.

A Mountmellick woman who has helped to raise thousands for charities in the past now wants to raise and donate money for a defibrillator in her community.

Janet Stewart is holding a fundraiser this February to mark the ten year anniversary since she suffered a heart attack.

Janet wants to raise money at the fundraiser to give to a Mountmellick group in need of a defibrillator.

If there is a group, club or community of people in Mountmellick that does not already have a defibrillator, Janet would like you to get in touch with her so she can raise these funds for you.

Ideally, janet would like a defibrillator to be at an accessible location in the town where it can be used quickly at any time it might be needed.

“There are already a number of defibrillators in the town but they are not accessible out of hours. We need one that is accessible to everyone at all times.

“I understand there is the issue of vandalism but it would be nice if we could have one you can open immediately and is accessible to everybody.

“It is my 10th anniversary the logical thing to do is give back to the town,” Janet told Leinster Express.

The Mountmellick woman has already secured the support of McElwee’s Pharmacy which has agreed to get in the defibrillator at cost price when the money is raised.

The fundraiser will be held in Turley’s pub in Mountmellick on February 17 and will have a Valentines theme to tie in with the theme of heart health.

On the night Janet will have music, a raffle and donation buckets and she is asking the people of Mountmellick and surrounding areas to come together for a fun night out.

Janet wants to give the gift of a defibrillator back to the community she loves.

“My husband and I have been living here all our married lives and we want to give back to the community, Mountmellick is a great town,” she said.

Last year, Janet along with The Mad Hatters group in Abbeyleix raised over €16,000 for the Irish Cancer Society, The Bone Marrow for Leukaemia Trust and The Ben and Jake Connolly Trust.

If you would like to help Janet, if you have any ideas about where the defibrillator could go in order to be easily accessible to the community or if you have any other thoughts on how to help this fundraiser please leave comments under this post on the Leinster Express Facebook page, tweet @Laoisnews, email news@leinsterexpress.ie.

A defibrillator delivers a dose of electric current to the heart. This depolarizes a large amount of the heart muscle, ending the dysrhythmia. Subsequently, the body's natural pacemaker in the sinoatrial node of the heart is able to re-establish normal sinus rhythm.

Fresh Film Festival: Is Ireland's Young Filmmaker of the year from Laois?