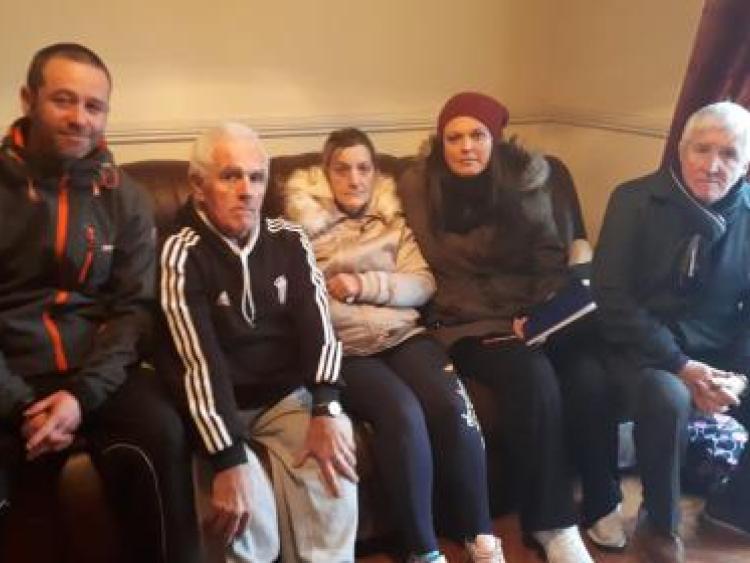 Messages of thanks have poured in from flood victims for the Mountmellick Flood Community Support group which has assisted in the recovery of over 60 homes since November.

The volunteers have said that they are now approaching completion of their emergency response to the flood.

They raised well over €20,000 in donations for flood victims in the town. They organised and managed the distribution of the funds to get homes back to their original condition, many of which were fixed before Christmas.

Each member of the committee played a different role in organising house restorations, fundraisers, communication, dealing with businesses and relevant authorities and putting in hundreds of hours of voluntary work to help their neighbours.

Chanele Kavanagh who was one of the volunteers on the ground everyday was the Laois Person of the Month last November on behalf of the group.

A number of people have written their thanks on the Mountmellick Flood Community Support Facebook page which has been a hub of communication for the town.

Conor Bracken from Manor Road in Mountmellick wrote the following touching message to the volunteers after they helped his family to get their home back.

"The time and effort you have all put into helping people affected by the flood is unbelievable, especially considering the fact that none of you were personally affected. I don't think we could have gotten such a response from Laois County Council without the help of the petition you started on our behalf. You've set everything in motion.They have to try and prevent this from happening again, the pressure is on them now. Hopefully they've realised how time sensitive this situation is after what happened last Sunday. On behalf of everyone affected, we can't thank you enough. I hope I get the chance to repay you all in the future. I'd like to give a special thank you to Chanele Kavanagh who has been in constant contact with us since the flood and has put a huge amount of time and effort into helping us and other families get back to normal! Hopefully I can contribute to the action group in the future. Thanks again to all of you!" he wrote on the Facebook page.

Fionnuala Dunne also wrote a touching tribute on the community Facebook page thanking the group for their work and the new friends she had made out of the difficult situation.

"Thanks so much to you all from Mountmellick Flood Community Committee for all your kindness, generosity, positiveness and the fact that you all cared so much to everyone affected by the flood. On behalf of my husband Noel, daughter Hannah and myself we cannot thank you all for your kindness and the care you have to me and my family. I will never be able to thank you all enough for your care and kindness to us. If I can ever do anything for anyone whom I met please do not hesitate to contact me and if I can I'll be there. Go raibh mile maith agat. I also met so many wonderful people, some I knew and the new friends I have made. Forever in our prayers," she commented on the Facebook page.

The group began their work on Novemeber 22 when severe floods hit Mountmellick.

A number of people in the town fired up their ovens, cooked hot meals and delivered them to people who had been devastated by flooding.

With the help of a number of businesses in the town, they also cooked for the emergency teams who worked around the clock in the hours and days after the flood hit.

This was the beginning of the flood support group.

Fundraisers were organised and the town pulled together. A 5K run was organised, businesses donated their money and supplies and thousands of euro accumulated to help flood victims.

Huge donations came in from people all over the world including Chris Lynch who left Mountmellick 53 years ago but never forgot the town.

Mountmellick woman in USA for 53 years donates $4,000 to flood victims.

Phones rang around the clock and slowly the volunteers got through the homes that had been affected by flooding.

Floors were replaced, walls were painted and dehumidifiers were powered on high. The Mountmellick Flood Community Support group was the crutch that many people needed in a time of panic and displacement.

There are still up to seven families that the group will continue to work with using the remaining funds.

Some families have still not made it back to their homes after the extent of damage that was caused in November.

Spokesperson for the Mountmellick Flood Community Support group, Annette Morris, said that it will use the remaining funds for these families.

"We have a list of a small number of uninsured and badly hit homes with very little support from other agencies, who will be offered the remainder of funds raised in an effort to help them pay for damage repair and the large debts they have incurred in their efforts to rebuild their homes. We will then wrap up our accounts and put them together so that anyone wishing to view what as raised and what was given out can request to do so.

"Once again we would like to express our deep gratitude to all of those who supported and trusted us to do what we set out to do which was simply to do our best to help people in immediate need in our town. At this point you are too many to mention but know you have made a big difference to peoples lives," she said.