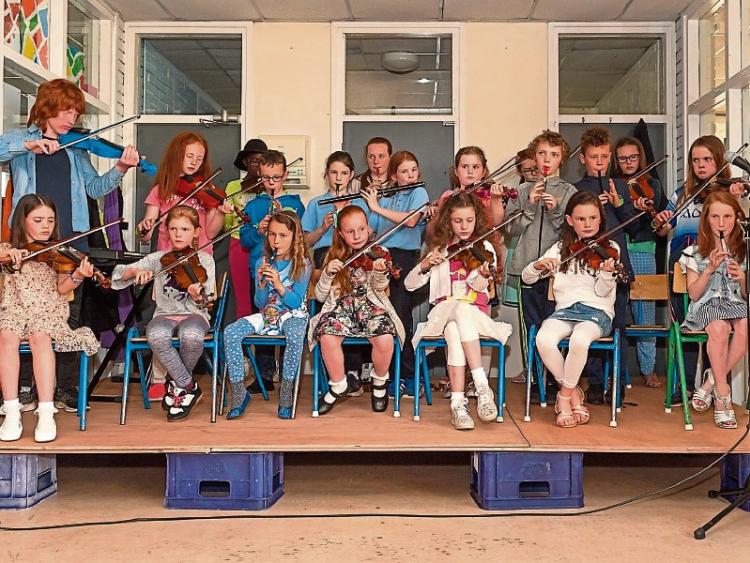 Free entertainment in the square and keen competition in the Community School will draw fans to Mountmellick on the June bank holiday week-end.

Laois County Fleadh Cheoil was launched at Mountmellick Credit Union on Monday, May 21 by CCÉ, Laois County Chairman, PJ Phelan in the presence of a large attendance. Amongst the speakers were Fr. Mícheál Murphy, Rev Young Nam Park, Garda Sgt Mick O’Connell and Cllr Paddy Bracken. All were enthusiastic in welcoming the fleadh and festivities to the town.

Although he will lead a long scheduled pilgrimage to Knock shrine, Fr Micheál will only be absent for one day and is looking forward to the remainder of the programme. Rev Park, however, is learning to play the harp with the local Comhaltas branch.

There are no specific traffic restrictions planned, according to Sgt O’Connell, as there is adequate parking for fleadh competitors and friends in the grounds of the Community College. The Gig Rig will be located in the square from 3pm to 6 pm on Sunday, the scene of many celebrations in the town.

Cllr Paddy Bracken pledged the support of the local authority in every way possible and commended the local committee for their endeavors, not only with this fleadh but in promoting the traditional arts of music, song and dance in the area over many decades.

A presentation was made by the local branch to founder Mary B Culliton to mark it’s 30th anniversary. County Chair PJ Phelan, in his address, complimented the Culliton family on their continued work in the field and thanked Margaret and the members of the local committee for their co-operation in hosting the event.

Amongst the 438 entries in the fleadh are 16 Grupaí Cheoil with up to 20 members in each, plus a similar number of Ceili Bands of ten members each.

This is a family event open to the general public.

As little as €5/€3 gains admission for the full day as follows : Friday 1st June, 7pm Ceili/Set dancing at Arts Centre; Saturday 2nd starting at 11am at Community College - Ceili Bands/Grupaí/ Bodhrán/Ceili Drumming followed by adult competitions at 6.30pm; Sunday 3rd starting at 1.30pm Solo/Duet/Trio indoors at College with Gig Rig at 3pm in The Square.

The Owenass Hall will be the focus on Monday afternoon with a Ceili from 3pm to 6pm, dancing to the Glenside Ceili Band, admission €10.

For those who want to enjoy the highlights a Showcase of Traditional Arts will be staged at the Arts Centre on June 30th.

Each branch will be represented in a two hour show.