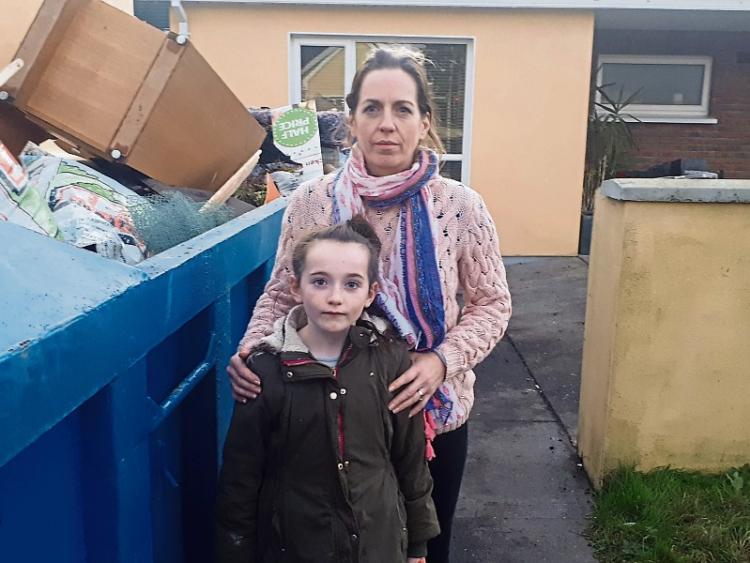 A Mountmellick family whose bungalow was destroyed by the November 22 flood, is one of many families in the town living in fear of a repeat disaster this winter.

Emmett and Elaine Conroy and their daughters Ita and Lily live in Manor Court estate, close to two rivers, an area where many people had to be rescued by boat.

The floods rose rapidly and breached their home by 2pm on that fateful day 10 months ago.

The water also came up through their sewage system, destroying floors, walls, electrics and all their furniture and belongings.

The family had to leave their home and find accommodation.

It was four months until they were able to repair their home enough so they could move back in.

“We got back home the day before St Patrick's Day. The damage cost €168,ooo. We had to completely gut the house, right back to replastering,” Emmett Conroy told the Leinster Express.

They had a difficult time getting their insurance company to pay up.

“We ended up arguing with the insurance company for four months. It took them two months to admit liability and another two months to give the final settlement,” he said.

It was a somewhat hollow victory because now they can no longer get insurance in case of a repeat flood.

“We can no longer get flood insurance in that house, but we can't sell it either because no-one would buy it,” Mr Conroy said.

He went to meet Sinn Féin leader Mary Lou McDonald in the MDA on her first visit to Mountmellick in late August.

“I wanted to tell her of the inaction of Laois County Council to the flooding, winter is fast approaching, we're more or less living in fear of what the next flood causes.

“We certainly won't have €168k to rebuild it this time. In essence we are looking at being homeless. Hopefully she will have some political influence,” Mr Conroy said.

Last February €3.1million was announced by the government to install flood defences to protect 46 homes in Mountmellick identified as at risk. It involves studies, planning, design and public consultation before works can start.

“That will take years to do,” said Mr Conroy.

“We were told by Cllr Paddy Bracken that the council would pay half the cost of flood doors, but the issue we have is will they cover the width of our driveway, that's 13.5 foot,” he said.

He got quotes of flood gates needed at every door and patio door, coming in at minimum €3,800.

He has invested in steel reinforced three foot tall concrete barriers along the garden boundary, and a raised platform under a new shed.

It is not enough to stop the floods Mr Conroy knows.

“We still have that fear. We got flooded from the inside out. My house is first on the sewer connection. It came up through the toilets and showers. We have asked if the council will install non return valves,” he said.

To make the home fully safe is a massive cost he explained.

“I have to buy a billage pump for the driveway. That would be wired so it would cut in if waters comes. That's €5k to €8k.

“Then I have to buy a back up generat0r if the power goes, and a backup petrol pump in case the billage pump fails.

“There doesn't seem to be any answer to us. At the moment, we are living in fear at the possibility of losing our home. I want to know what the council is doing to prevent that,” Mr Conroy said.