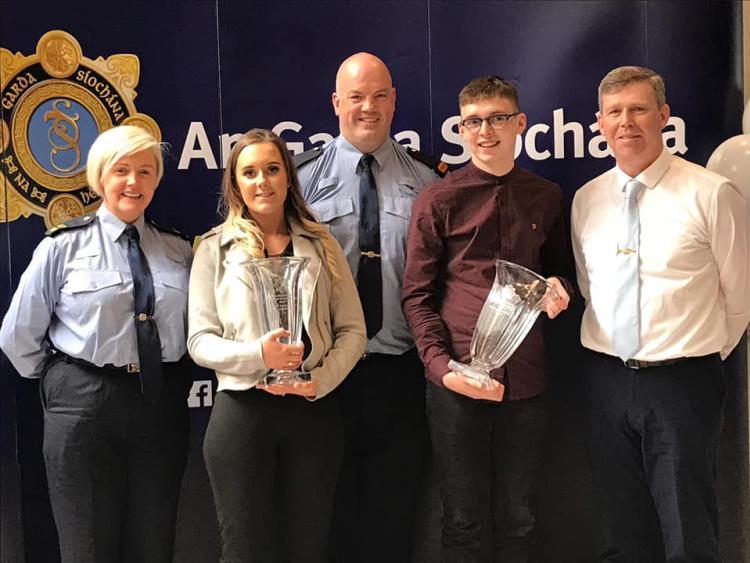 A young Laois woman has been awarded by An Garda Siochana for her strength, bravery and determination in overcoming obstacles and turning her life around.

Lauren Lawlor from Mountmellick is a student in Mountmellick Community School and was nominated for a Garda Youth Award by her teacher Helen Shortall.

In Lauren’s first two years in Secondary School, her teachers described her as being a very angry, defiant young person, who engaged in anti-social behaviour and was on a self-destructive path.

Lauren’s home life at times was quite turbulent and challenging. She lived with her mother, whose health was increasingly deteriorating and who was hospitalised regularly.

In third year Lauren tragically lost her mother to suicide.

This had a devastating impact on Lauren and her extended family. Lauren was lucky enough to have a very supportive grandmother, aunt and uncle and a school community who rallied around her.

This tragedy broke Lauren down to a fragile young girl but with strength, bravery, determination and a lot of support she built herself back up.

Under these circumstances, it would have been understandable if Lauren's attitude and behaviour had deteriorated even more but she chose not to let it defy her.

Lauren engaged in Transition Year despite her friends and colleagues proceeding to 5th Year. This acceptance and willingness to change was the beginning of her transformation. Lauren entered into it wholeheartedly and embraced all new challenges that were offered, all while going through a grieving process.

Lauren is now in sixth year and is preparing for her leaving cert. Lauren is planning a career in Social Studies which will be a very suitable career for her as she has an incredibly caring and empathetic nature.

Her attitude has changed dramatically, she is a very different young person. She is now a positive influence on her peers and is seen as a role model.

She has overcome very difficult personal tragedies and emerged from these as a person of strength, ambition and vision.

Staff of Mountmellick Community School are incredibly proud of Lauren and all she has achieved. She has defied the odds, overcome difficult and devastating circumstances and deserves recognition for same.

Her nominator Helen Shortall said she has ‘clearly defied the odds, has overcome a very difficult circumstance.’

"We don't even know how strong we are until we are forced to bring that hidden strength forward. In times of tragedy, of war, of necessity, people do amazing things. The human capacity for survival and renewal is awesome," she said.