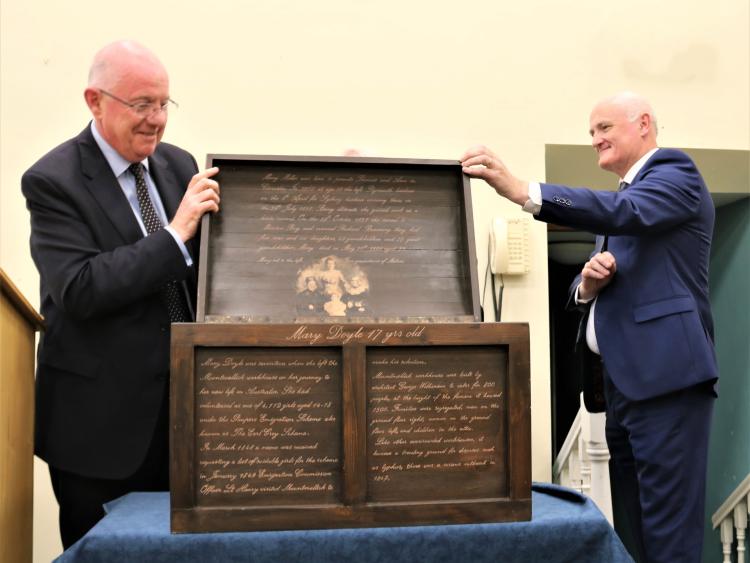 She left hoping for a new life in Australia, with just a donated travel box of clothes and tools to help her on her way.

She will now never be forgotten in her home town, thanks to Mountmellick Embroidery Museum and prisoners from Arbour Hill in Dublin.

A replica travel box has been meticulously created by the prisoners, and it will now be on permanent display in the museum.

The Minister for Justice Charlie Flanagan formally presented the Famine Box to the museum this May 2019.

The box commemorates the 4,112 orphan girls aged between 14 and 18, who were given assisted passage to Australia between 1849 and 1853. The initiative was to alleviate overcrowding in the 118 workhouses in Ireland.

The girls were shipped as part of the Paupers Emigration Scheme, more commonly known as the Earl Grey Scheme, named after the British Minister for Home Affairs at the time, who devised it.

The young girls were also better fed on the boats to boost their health and therefore chance of a job or marriage.

Mary Millar from Mountmellick was selected along with 91 other girls from Queens County (Laois).

Ms Walsh recounted the life that her ancestor went on to have at the launch in Mountmellick.

She first got a job as a domestic servant and moved to Moreton Bay and married Richard Browning. They took a lease on 92 acres of scrub land which they had to clear, build a house on and plant crops on in order to keep their lease. The work was hard and labour intensive . Along with this Mary bore 11 children and had 43 grandchildren and 27 great-grandchildren.
She died in 1906 aged 75 years.

Below: Lou Walsh at the launch of the famine box in Mountmellick museum, commemorating her great great great grandmother Mary Millar. 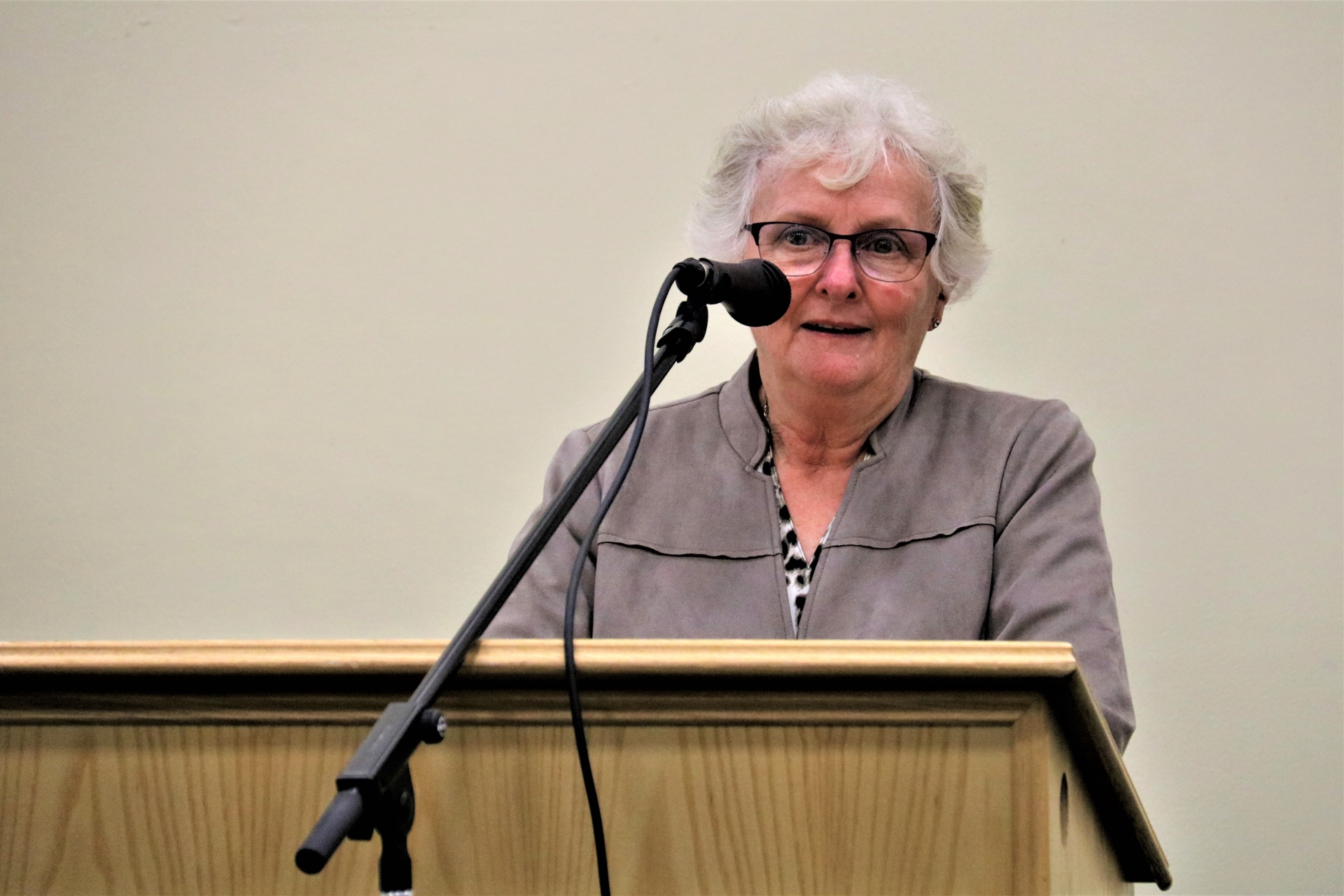 The Irish Prison Service began building replica boxes and writing their stories on them in 2015. To date, 24 boxes have been made in Arbour Hill Prison. Four were sent to Australia, one is in the United Nations in New York, one in Connecticut, one in Áras an Úachtaráin and the rest around Ireland to towns where there were workhouses.

Governor of Arbour Hill prison Liam Dowling said that the inmates take pride in making these boxes.
They hope it will help keep alive the memory of these girls which had been forgotten in Ireland.
”This project since inception has linked whole communities both at home and abroad, and reunited long lost relations who had not known of each other’s existence,” he said.

Mark O’Brien of the Irish Prison Service started the project after he first heard about these girls while at an event in Australia.

Michael Blanch is the chairman of a committee to commemorate the Victims of the Irish Famine, which has campaigned for a set day to commemorate it.
“It has taken myself and my family about ten years to get the State to recognise the importance of the Famine and commemorate it on a set day,” he said.

Minister Flanagan said that he visited the memorial to the orphans while in Australia on a family trip.
He thanked Governor Dowling for breaking with tradition and inviting him to present the box on behalf of Arbour Hill Prison and the Irish Prison Service.

Ger Lynch formally accepted the box on behalf of Mountmellick museum.
He explained plans to expand their museum to incorporate the many historical elements of Mountmellick like the Quaker heritage, the industrial past, the political past, the cultural and continual development of Mountmellick Embroidery which is its cornerstone at present and attracts many visitors each year.

Museum Chairperson Ann Dowling thanked all of the speakers and contributors to the evening.
These included Clonaghadoo Ceolthas, Emer Dunne, Ger Philips and Mary O Shea for providing music and song.

Ms Dowling also thanked the Board and Management of the MDA, the museum committee and the Friends of the museum for working to ensure a great experience for all visitors.
“What was once a sign of despair for the girls involved is now a symbol of hope and reconciliation which has joined up communities both at home and abroad,” said Ms Dowling.

The Famine Box along with a tapestry of the names of the girls transported from Laois, is now on permanent display in the Mountmellick Embroidery Museum. It is open daily and on weekends by appointment. 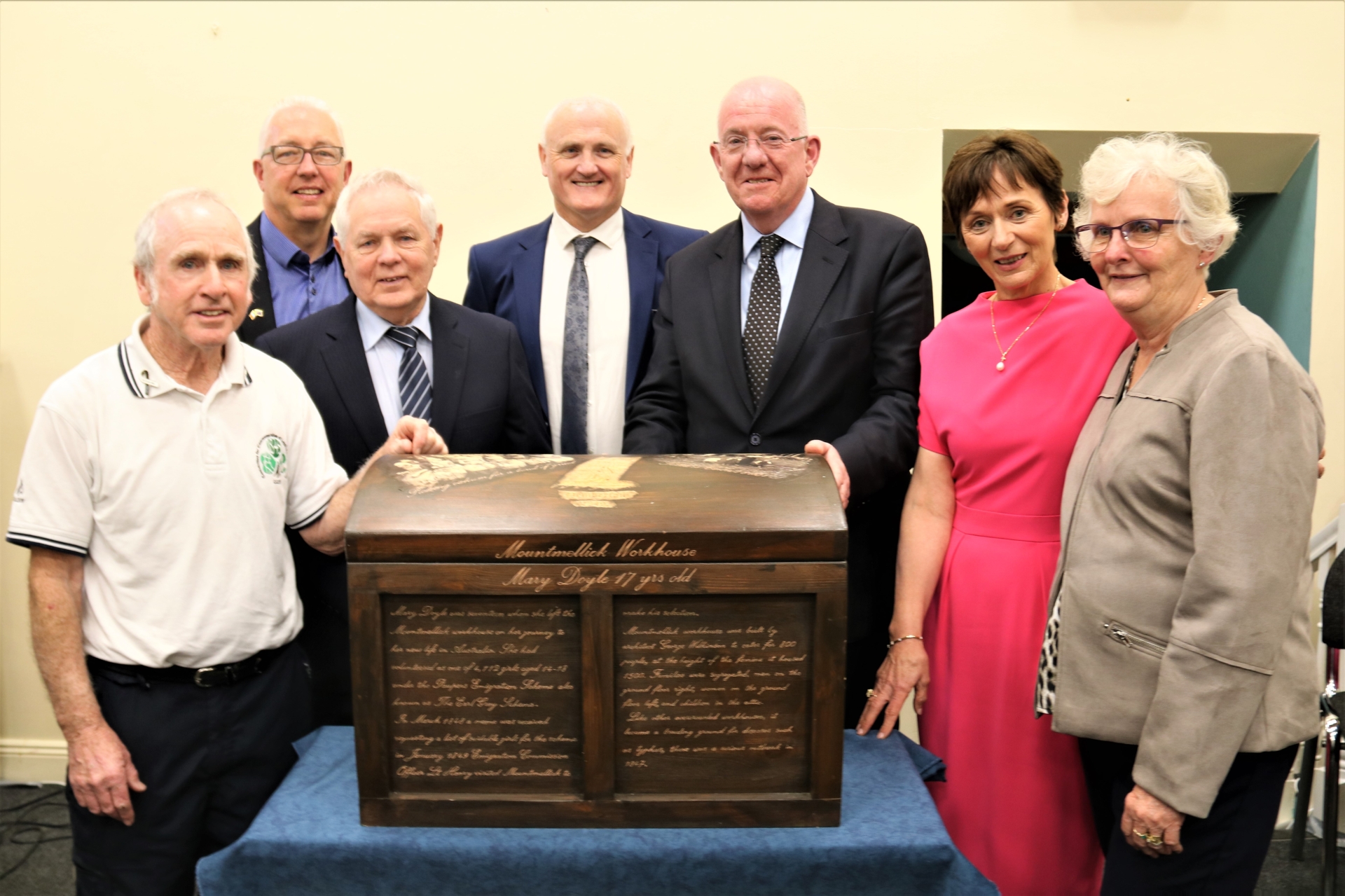