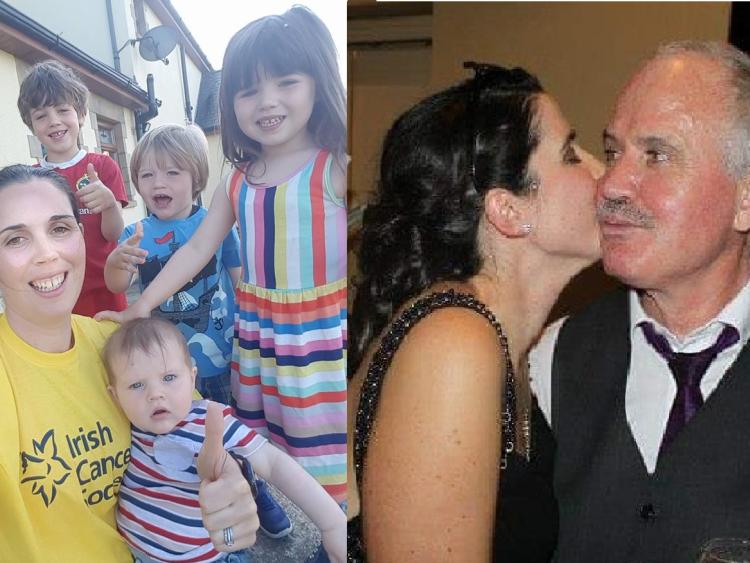 Ruth Guilfoyle who is taking on the Irish Cancer Society's Marathon in a Month challenge, with her children, and her late father William Guilfoyle.

A Laois mother of four is taking on a marathon challenge this July, in memory of her father.

The busy working mother with four young children has added running to her schedule, to raise money for the Irish Cancer Society.

Her story is a heartbreaking one.

"I decided to do the marathon in the month for the Irish Cancer Society because in 2017 cancer rocked our world like we could never have imagined. In 2015  my big strong fit healthy, 56 year old dad was diagnosed with cancer." she said.

"The diagnosis came has a huge shock to us all. After the initial shock Dad's attitude to the cancer was amazing. He was determined to face the treatment head on and give it everything he had. A week later he was in St Vincent's ready to start his first round of chemotherapy.  For the next two years Dad travelled to Dublin every fortnight for chemo, he also faced bouts of radium and in between he had three major surgeries.

"Yet through all of it he stayed so strong. staying working throughout his treatment and keeping his life going as normal as he possible could. I can only imagine how difficult it must have been for him but he would never let on. Mam was probably the only one he'd let his guard down to," Ruth said.

"Towards the end of September 2017 Dad started to get very tired. He wasn't long after his third surgery so he was on a break from the chemo at the time. They went up to Vincent's and admitted him for tests. On the 7th of October Mam brought him home from hospital, the cancer had spread and this time there was nothing more the wonderful doctors could do," she said.

Ruth was 39 weeks pregnant with her fourth child, and there was a chance that William might not live long enough to see him.

"On the Monday we made the call that I would be induced. On Wednesday 11th at 4.10pm our beautiful baby boy was born. No thought was needed for his name, We called him Liam, William in Irish after Daddy," she said.

She got discharged early to bring Liam to meet his grandad.

"My doctor and all the staff in maternity ward were amazing and in 24 hours Liam and I were discharged from hospital. My husband Paddy and Eoin, Sadie, Andy, Liam and I headed home to see Grandad and introduce him to his new Grandson and namesake. That was the last day dad came out of his room, three days later he was gone, and our hearts were completely broken. Daddy was the best Dad we could have asked for and the most amazing Grandad," she said.

Ruth wants to help raise money to find a cure for cancer.

"Unfortunately there wasn't a cure for Daddy but I hope that raising funds for the Irish Cancer Society by completely the Marathon in a month will help one day find a cure for Cancer. Its also a challenge for me, I've only recently started running and while 46km in a month might not seem like much for some, with 4 smallies getting out the door is an achievement most days :)".

The Irish Cancer Society is urging more people in Laois to get moving as part of its virtual marathon campaign, which challenges people to clock up 42km in 31 days.

By taking on Marathon in a Month this July, participants will be raising vital funds that will help ensure no one in Laois has to face cancer on their own. Each year an overage of 469 people in Laois are diagnosed with cancer.

Participants can complete the distance of a marathon in any way they chose; walking, running, hiking, swimming or cycling. By registering, they’re given an everydayhero online fundraising page, this links to their fitness app, keeping track of their progress as they raise money to help the 40,000 people in Ireland who will be diagnosed with cancer this year. Last year hundreds of people around the country took on the challenge and raised €90,000 in the process.

For more information or to register to participate in Marathon in a Month visit www.cancer.ie/marathoninamonth