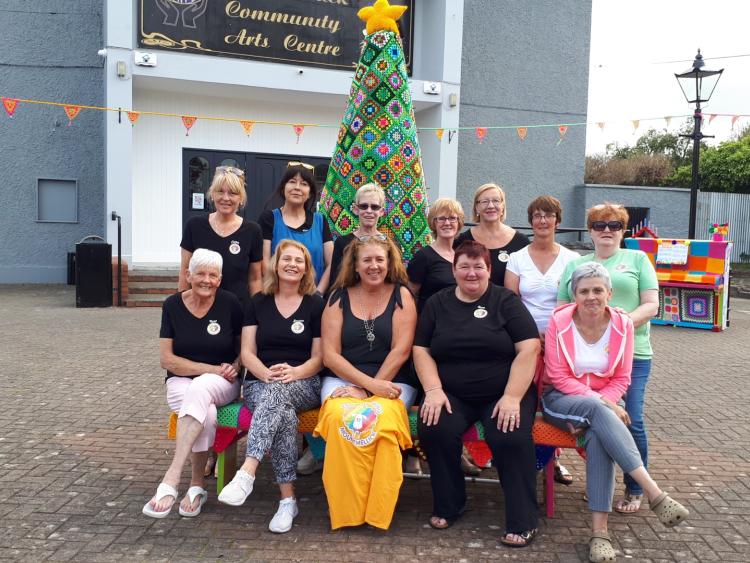 Mountmellick Christmas tree now has a little summer version made out of wool and fairy lights.

The tree has appeared as part of Yarn Bombing Mountmellick’s latest surprise attack last weekend which has blanketed the town for the sixth year in fun wool artworks.

The tree is thanks to a supporter of the craft club all the way from Wexford.

Mary Sheehy is from Dingle and lives in Wexford.

“I drive up and down to Athlone to meetings a lot, and usually we have a meeting in Athlone at the end of August. The last few years I’ve noticed the yarn bombing so I was following the page. Then last year when I saw all the little bicycles I said I had to just email the group and say how fabulous it is. I emailed, Nina got back to me, we had a big long chat and I was saying I wish there was a group like this in Wexford that I could join, she said set one up, but I said I don’t have time! I’m doing my PhD and I’m just working full time. But I offered to crochet and Nina said yes," she said.

Mary started collected the yarn and dropping off squares to yarn bombers Trish and Doris Lalor on her way through town.

There are now over 500 squares on the tree and Mary made them all.

“We put it together and made the star, and Mountmellick Men’s Shed made the frame,” explained Nina Horan from the group.

“It’s an homage to our tree to say thank you to the town’s Christmas tree committee, it’s all about community and collaboration,” she said.

Last Sunday Mary came up to meet all the members beside her completed tree, on display outside Mountmellick Community Arts Centre.

“I love it, I actually was thinking I’m going to make one for myself at home,” she said.

Mary has been made an honorary member for her support, and was presented with a yarn bombers t-shirt.

It is the sixth year of the yarn bombings in the town, and they will remain up for several weeks for visitors to stop and enjoy.

New additions to spot include a wigwam, more bicycles, a rocking horse, window boxes and even traffic cones, a nod to the town’s long lasting roadworks.

Traders have joined the fun with sponsoring beautiful wool figures in their windows and woolly seats outside.

“The main reason we do it at this time is for the passing traffic for the Electric Picnic, but this year we are also co-ordinated with the Free Market exhibition on the square on September 5, on their request. It all feeds into the heritage of textiles in the town,” said Nina.

“We have had a lot of other community groups help, from the Men’s Shed and Mountmellick Community Employment Scheme, and loads of volunteers that we will thank individually later on on our page. We couldn’t get it all done on our own, we are only a small group of women,” said Nina.

New members and supporters are always welcomed by the group, based in Unit 2, Bay Road Business Park. Contact them on facebook.