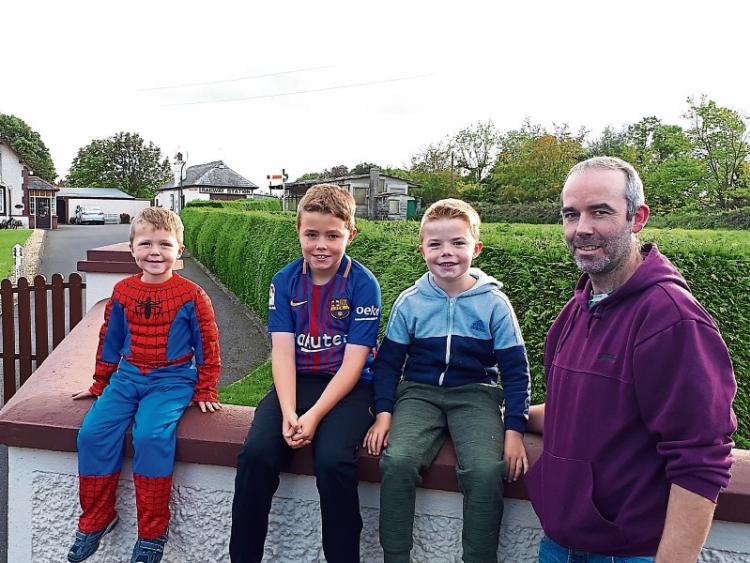 Paddy Brazil with sons Max, Noah and Alfie, outside the former train station in Mountmellick.

A Mountmellick dad is calling for trains to come back to the Laois town.

Paddy Brazil has started an online campaign to demand the restoration of a train service by Irish Rail.

He believes that restoring the track from Portlaoise would bring life and growth back to Mountmellick.

“It would be huge for the town. Mountmellick is dying on its feet since the post office moved out of the town centre. Portarlington has about 4,000 more people and that’s down to having a train station. Mountmellick is forgotten. I’m so sick of seeing it bypassed. We were to get a ring road and it never happened,” he said.

He claimed that Mountmellick's Cllr Paddy Bracken is supporting his bid, as is Laois TD Brian Stanley.

An online petition has gained about 350 signatures. See it here.

Paddy is ready to begin a paper petition in the town for people not online.

“As soon as I hear back from the ministers we will see what is the next step to take, maybe a standing petition and let them know that people mean business,” he said.

Mr Brazil works in the Standex factory in Mountmellick and his wife teaches in the town. They have five young sons. He wants commuters to be able to catch a train directly from the town to work and college.

“I know we would all use it. People are paying massive money for rent for colleges, this would give us all another option,” he said.

“People have to drive to Portlaoise or Portarlington to get to a train. This would help people in Rosenallis and Clonaslee too. It would ease the pressure of driving in gridlock daily and with everything going green, an electric train would dramatically reduce our carbon footprint,” he said.

He believes it would bring tourism business to his town too.

“There is a certain romance about the train. People would come and walk around the town,” he said.

He wants a change from focusing on how thriving Mountmellick used to be.

“Mountmellick was the Manchester of Ireland but I’m sick of hearing about the past, I want to do something for our future, for our kids,” he said.

Mountmellick train service operated from 1885 to 1963 as an outreach of Portlaoise station. The station house on the Rosenallis road is now a private home and the owners have carefully preserved the station. However much of the train track is gone.

Mr Brazil knows it is a big ask.

“They are going to say it is about money. I know it would cost millions, but they seem to have money for everything else, why not Mountmellick. They would make back that money. Even if they brought the line as far as Derrycloney. All I want is an answer, a real reason,” Mr Brazil said.

He started his campaign in late August.

“This is something I’m passionate about. If it’s there people will use it. I have got a great reaction, I haven’t got one bad response yet,” he said.