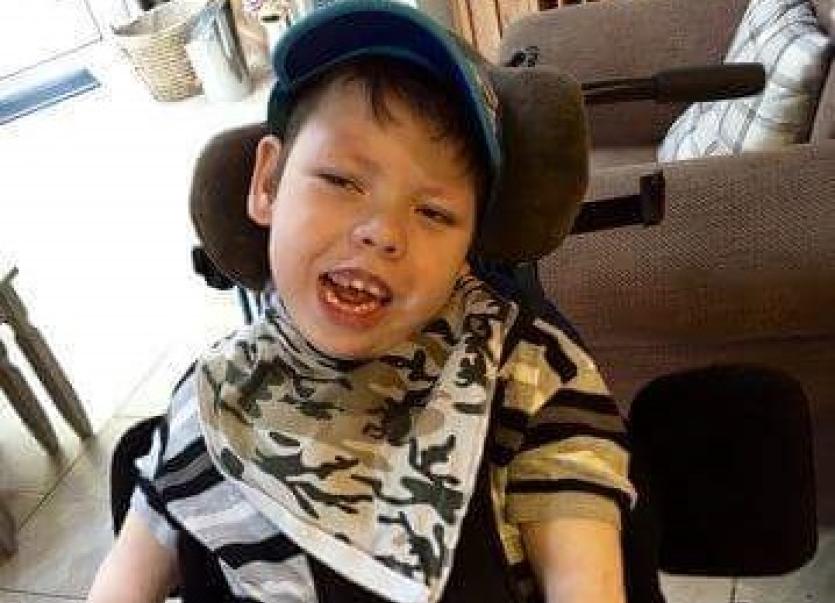 Ben Connolly from Mountmellick, Laois who is in his final stage of life. A house built for him and his late brother is almost complete.

A heartbreaking plea has been made to finish the Ben & Jake Connolly House in Mountmellick in time for serious ill child Ben to get a chance to live there.
The wheelchair accessible medically equipped house was built through community fundraising and volunteer workers. Over €250,000 was donated along with many materials.
The volunteer run Ben and Jake Connolly Trust has requested the community to give a final €10,000 to furnish it. So far about €3,700 has come in. They have set a hopeful moving in date of November 9.
“Ben has very, very sadly entered his final phase of life and it’s with a heavy heart that in the near future he will join his little brother Jake,” the trust said on a new GoFundMe page.
Ben's mother is Nicolette Farrell.
"It would still mean such a lot for Ben he is 5 stone plus so he is incredibly hard to move - even up the bed, so his ceiling hoist in the Trust House will be a huge benefit. Any illness could detrimentally knock Ben at this stage so the Trust house will also give him the facility to be more separate from his brother Billy if Billy is ill. It will also give him the facility to sit out in his special chair for a while if he feels up to it. It will also give him the ability to be washed properly in the wet room there, as currently he is confined to bed baths.

"It would also hugely mean so much as Ben is now on borrowed time, he has deteriorated since last year and was put under the care of a Palliative Consultant and Palliative care plan recently," Nicolette said.

She gave an update on Ben's condition.
"Well he has sadly deteriorated since this time last year, he has stabilised the last two or three weeks after several weeks of increased deterioration, to say that doesn’t mean he’s better - he’s still on very strong anti-nausea and vomiting medication which causes him to sleep more than he ever did, it just means the requirement to continually increase these medication doses to control his symptoms has temporarily stabilised. He is at an increased risk of an illness taking him, and we have been told he won’t go back to the Ben he was prior to last year that this is now basically a process," she said.

The Trust house, built near Mountmellick, still needs a washing machine, fridge, curtains, bedroom furniture and a table and chairs.
Ben and Jake were born with a rare life limiting condition Allan Herndon Dudley Syndrome, suffering seizures, loss of muscle control and brain damage. Jake passed away aged 2 in January 2016. Their little brother Billy has not got the condition.
A year after Ben's passing, the house will pass to another family or charity, as a lasting legacy of the two little boys for which it was built.

The Trust has asked people to give €10.

"We realise that you have all dug deep for this initiative. We know that it has been a few years in the making, but we refuse to give up. You put your trust in us and it will not go to waste.
If you can help at all, we would be so grateful. If 1,000 people donated €10, we would be done. Please remember, as we have said this is not just for Ben and the memory of his little brother Jake, but for the countless children and families it will help for decades to come," they said.