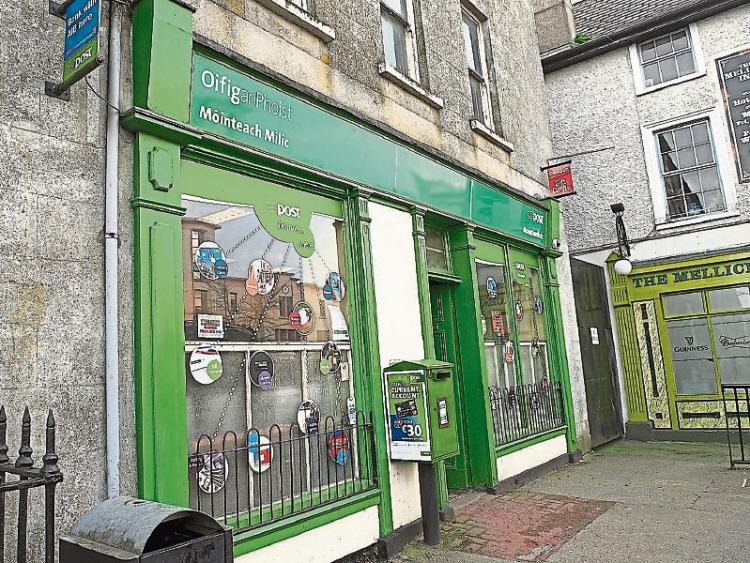 Shopping in town centre hit by loss of Post Office.

A plea to allow more free parking in Mountmellick to help struggling businesses and make shopping easier for local people was stymied by red tape in county hall last week despite having the unanimous support of councillors.

Cllr Paddy Bracken won the support of his five colleagues on the Borris-in-Ossory Mountmellick Municipal District for free parking of up to 45 minutes to be allowed in the town centre around O'Connell Square.

Cllr Bracken tabled a motion, seconded by Cllr Seamus McDonald, calling for an hour of free parking but he was prepared to accept the free 45 minutes permitted in Portlaoise.

However, a written reply from the council's roads department said bye-laws state that 30 minutes free is allowed and a parking fee of 60 cent per hour applies afterwards. The reply added that an increase in free time would mean a bye-law change and this had to be raised in the first instance at a Strategic Policy Committee (SPC) for roads.

“There has been a loss of business in the town with the Post Office closing. The businesses there are feeling that bit harder to survive. I don't think it would be a huge burden on this council if we got at least the 45 minutes as per Portlaoise,” he said.

Sending it to a committee for consideration would be like “kicking the can down the road”.

He said the bye-laws were introduced to help business and shoppers because commuters were parking on the square for the whole day.

Cllr McDonald asked if the change could not be approved by councillors of the district.

Cllr Bracken, chairman of the SPC, said a bye-law change may not be needed. He added that the SPC does not have the power to change the laws. He said it would have to recommend that the change is sent back to all councillor for approval.

“I don't want to see the whole town closing down,” he said in desperation.

Director of Services Donal Brennan said the matter had to go to the SPC but he committed to trying to speed up the change. He also acknowedged that the Post Office move had affected the the town. However, he said the bye-law change, while just one line, could take some time. He suggested a short term measure could be taken to facilitate a change over Christmas.