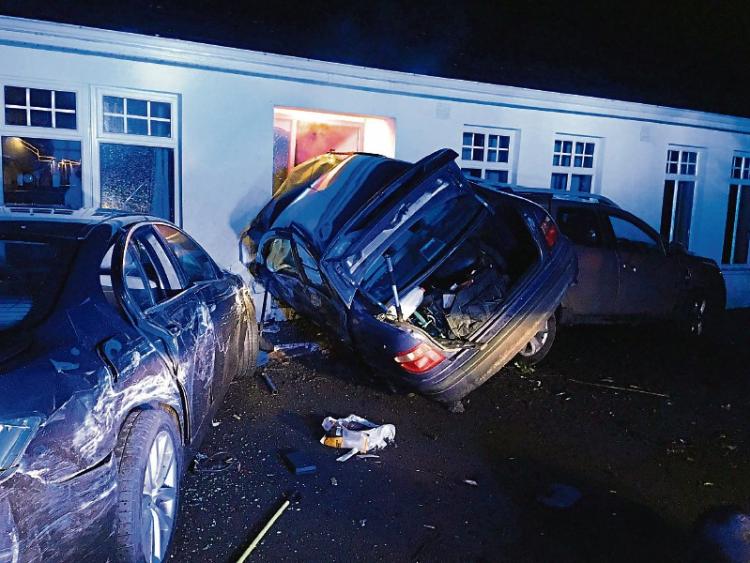 A family from Mountmellick in Laois whose house and cars were smashed on St Stephen’s day 2019 by a speeding car are now afraid living there.

The Buggy family were luckily at the back of their house at 6pm in Harbour Street when a car speeding from the Portarlington Garryhinch direction drove straight through the T-junction and into their garden.

It smashed two cars and crashed into their front door knocking part of the wall in.

“It struck like a grenade,” Betty Buggy told the Leinster Express.

Herself and her husband and son walked around to the front of the house where the driver had already got out of his car uninjured.

“We were all in shock. We are so grateful nobody was injured. We are very thankful to the fire brigade and the ambulance crew and Gardaí who came so quickly,” she said.

She described the damage.

“Both cars that were in the driveway are written off. There is major structural damage done to the house. A metal pier cap flew through the house and hit a kitchen press but luckily we weren’t in that room. If the cars hadn’t been there, it could have been much worse,” she said.

It is the third time in recent years that a car has crashed into their property.

“The second one hit the house too but it wasn’t as serious. After last time we didn’t think it would happen again but it’s not a fluke,” Betty said.

They are urging Laois County Council to install traffic calming.

“We are hoping that the council will respond in a proactive efficient way because they are the only ones who can respond. We implore them to do it quickly. The problem is speed . Whatever the council does has to be effective. It has to be something that will work” she said.

They are living at the rear of their bungalow since, which has not yet been fixed.

“The house is like a bombsite now. Nobody sleeps at the front of the house. We are afraid living here. We are here since 1995 and are very happy here, but this is hanging over us.

“All the community are very worried in this area. It could have been any of them. The road is so busy here. It’s a fluke the driver didn’t meet a car or somebody on the path. It’s far reaching what could have happened,” Mrs Buggy said.

Cllr Paddy Bracken described the crash into the Buggy home in Mountmellick as “shocking” at the January meeting of the Mountmellick Borris-in-Ossory Municipal District.
“How no-one was killed, it’s just unbelievable. The Buggy family were at home. They are living in fear,” he said.
“Major work needs to be done there. There is going to be someone killed there eventually,” he said.
He tabled a motion that Laois County Council carry out traffic calming and safety measures at the junction of the R422/R423 at Turley’s Pub on Harbour Street.
Cllr Seamus McDonald supported the motion and said he saw the scene that day.
“It was frightening, the place was wrecked,” he said.
The roads section replied that the area will be inspected to determine the most appropriate intervention required. Works will be subject to funding being available.
Cllr Bracken was not satisfied.
“I appreciate the reply but it is not enough. There will be a fatality. The Buggy family are living in fear, it is a serious problem. It’s like a motorway coming up to that junction. A bigger job needs to be done soon,” he said.