Nun was born in Mountmellick in 1921 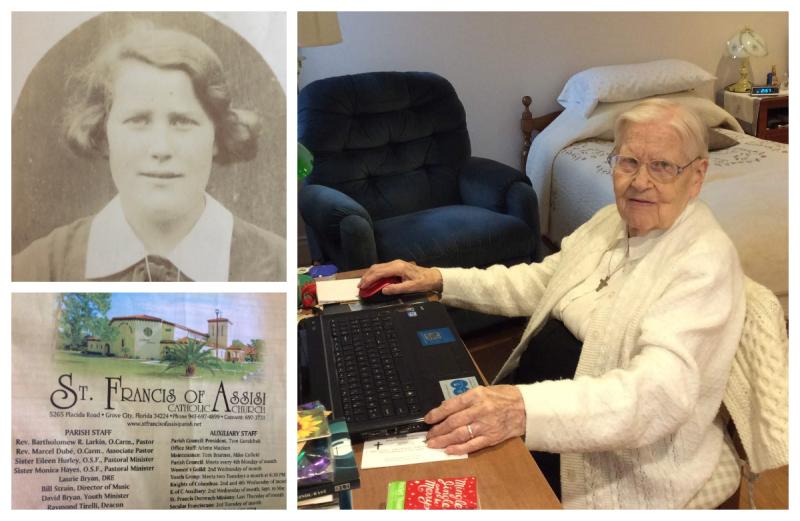 A woman born in Mountmellick a century ago has celebrated her 100th birthday in the United States.

Sr. Monica Hayes was born on August 8th 1921 in Irishtown, Mountmellick, the youngest child of the late Patrick and Brigid Hayes and sister to the late Ita, John and Jimmy.

She was educated by the local Presentation Sisters both at primary and secondary levels and then entered the Franciscan Missionary Sisters at their noviciate in Bloomfield Mullingar (now a hotel) where she began a life full of interest and venture.

In 1940 Sr. Monica travelled to Rome for her Profession and later that year to U.S.A., where she still lives. Her wartime transatlantic voyage was full of incident.

She embarked from Lisbon and in mid Atlantic they encountered a severe storm. A huge wave turned the liner on its side, throwing all the passengers from their bunks. Fortunately immediately afterwards another large wave righted the liner. This was the closest to sinking that the captain had ever experienced. Approaching New York another traumatic event occurred where their liner was chased into port by a German submarine.

For the next 38 years Sr. Monica worked in the education sector starting with Elementary Education Training in the Bronx, New York and subsequently in various High Schools in Pennsylvania, Minnesota and Seminole, Florida, having achieved a Master’s degree in education along the way.

In 1979 Sr. Monica’s working life changed dramatically as she moved from education into parish work. She was assigned to Grove City Florida, which was a fledgling parish and where some years later the Church of St. Francis of Assisi was built.

Parish work became her new ministry for the next 31 years and her responsibilities included Director of Religious Education and Moderator of the third order of the Franciscans.

In 2010 Sr. Monica retired in her 89th year to the Franciscan retirement house in Newton Massachusetts and more recently to Framingham. In retirement she has many interests and keeps herself busy knitting, crocheting, reading and doing artistic work making greeting cards.

Over the years Sr. Monica returned home regularly to Mountmellick and still reminisces about her youth and retains a great interest in her hometown.

On August 8, Sr. Monica celebrated a very happy 100th birthday with her Franciscan sisters. Unfortunately due to Covid, her family in Ireland could not travel to join her in the celebration.