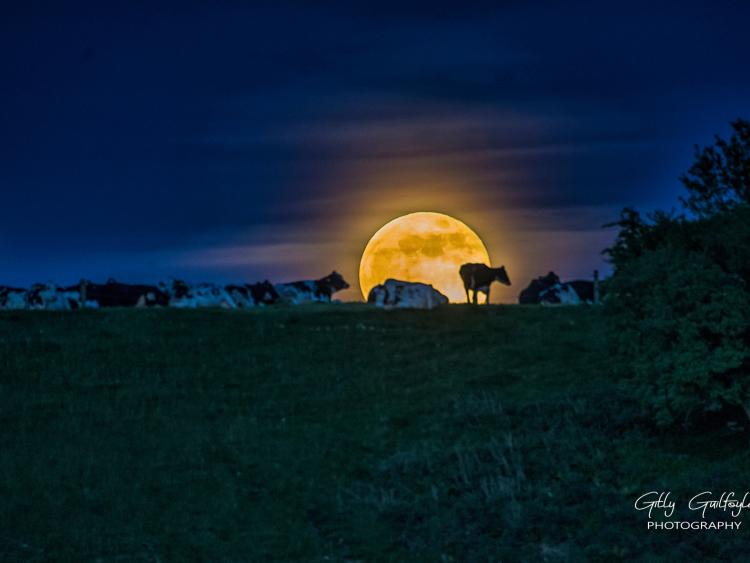 A photography enthusiast from Laois has captured this stunning photo of the recent supermoon.

Pat 'Gilly' Guilfoyle from Portlaoise is a member of Portlaoise camera club.

He explains how he took this fabulous shot of the moon rising over Hewson's Hill, near the Rock of Dunamaise.

It was captured last Wednesday May 6 just as the moon rose. It has no magic filters, just some basic photo editing, but Gilly says a bit of magic happened on the night.

"I planned this photo with an app called PhotoPills, so I knew it would be rising over that hill on Wednesday night at around 10.15," he said.

"I went out to the hill which is just across a field from the Rock of Dunamaise. I needed to be on as low ground as possible so i set myself up in the graveyard of the little Holy Trinity church and waited," he said.

"I took a few test shots to get the exposure right.  Finally the moon started to appear and to my surprise so did the cows. it was an added bonus.  You don't have much time oddly enough . After around three shots the moon was gone up over the cows and started to slowly turn its usual grey/white colour," he said.

"All in all I expected a super moon shot rising over the hill but ended up getting a super supermoon shot with the cattle in front.   Packed up and went home happy... what a great way to isolate," Gilly said.