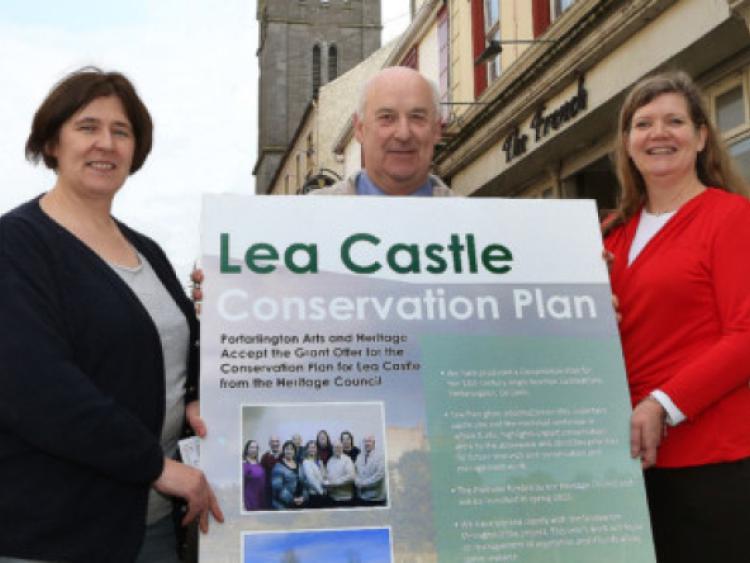 A fundraising drive has been launched to raise funds in addition to the €8,000 provided by the Heritage Council for the conservation report on Lea Castle.

A fundraising drive has been launched to raise funds in addition to the €8,000 provided by the Heritage Council for the conservation report on Lea Castle.

The Lea Castle Conservation Project, initiated by Portarlington Arts & Heritage Group in early 2014, has gathered pace over the past year and its importance has been recognised by both Laois County Council and the Irish Heritage Council.

The Heritage Council provided funding of almost €8,000 towards the cost of preparing a detailed conservation report on Lea Castle, which is of immense historical and architectural importance in both local and national terms. The group is planning to launch the report at an official function in Portarlington in March 2015 at which copies of the report will be made available to the public.

Laois County Council, through it’s Heritage Officer, Catherine Casey, provided invaluable support to the project. The progress made on the project was officially recognised by the Council recently when the group was awarded the top prize in the heritage section of their annual Community and Voluntary Awards Scheme.

The fundraising drive began with a coffee morning on Saturday 14th February from 11.00am to 1.00pm. The event took place in the French Quarter restaurant on French Church Street, Portarlington. Members of the group were on hand to answer any questions about the project and to discuss the conservation report and future work on the castle.