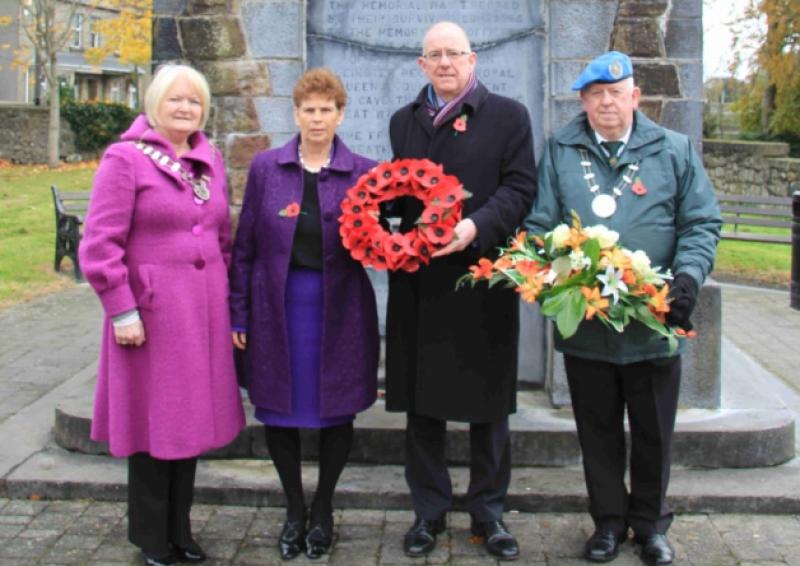 The following is the text of the speech given by Charles Flanagan TD at the Remembrance Sunday ceremony at Millview.

The following is the text of the speech given by Charles Flanagan TD at the Remembrance Sunday ceremony at Millview.

As we progress upon a decade of commemoration it is right that we make time as we are doing this morning in Portlaoise, for reflection, remembrance and reminder of the bravery of the men in whose memory we stand. We must also not forget the women who remained behind in this time of great difficulty. We remember all our dead.

Almost one hundred years ago we recall some of our Laois colleagues went to war for King and country, some went to advance the cause of Home Rule, some went to defend he Union with Britain, some went in solidarity with Catholic Belgium and in defence of small nations. Many went because of urban poverty and economic necessity. Joining the army was for many the difference between food on the table or a cold and hungry wintry. Some even went for a sense of adventure, foreign travel and a bit of excitement. Most believed the war would be over by Christmas.

At home the long and difficult struggle for Home Rule was just about resolved, and the role of the Irish Parliamentary Party, often forgotten, always underestimated, must be remembered and acknowledged. The Home Rule Bill had passed and had been suspended for the duration of the Great War, which of course lasted longer than anybody anticipated.

It is important that we mark the contribution to democratic politics of Parnell, Dillon, Healy, Redmond and others in the Irish Parliamentary Party.

History has been unkind to John Redmond, castigating him as an Imperialist and blaming him for having sent so many young Irishmen to fight in Europe. Mention of Redmond was virtually deleted from the school curriculum after independence. Indeed we recall one of John Redmond’s bigger meetings at the GAA grounds in Portlaoise when in August 1914 he spoke to over 1,000 Laois people, many of whom recruited and backed Redmond’s call that “it’s the holiest work that men can undertake - to maintain the freedom and the rights, and to uphold the peace and the order and safety of their own nation’. The Maryborough volunteers saluted in smart military style while their more informal Heath comrades burst into cheers, Maryborough Pipe band and Maryborough Fife and drum played national airs, flags flew and banners boomed and bands were there aplenty from Mountmellick, Abbeyleix and Coolrain.

Many recruited there and then farmers’ sons, tradesmen, sons of shopkeepers, smallholders, tenants, signed up. Some never returned.

Their names are here.

Redmond’s firm resolve in politics was for persuasion and compromise rather than violence and confrontation. It is worth remembering that at the outbreak of the First World War, the land question in Ireland had been resolved and Ireland became a nation of landowners. Redmond believed that close and friendly relations with our neighbour offered the best hope of containing the excess of unionism which ultimately transpired to be a wise move and a strategy ignored by subsequent Irish leaders. We are once again reminded that peace comes at a huge cost.

We recall however the improved relations between the two islands of Great Britain and Ireland over the past two decades where democratic politics has shown what it can achieve. It has allowed people with different viewpoints from different backgrounds to find common ground by engaging with one another to resolve their differences in the common good.

As in the period that we reflect upon this morning, we remember that Irish soldiers continue to serve to advance the cause of peace in this world. We think of them today as we remember those who died in the First World War and we work towards the safety of their missions and the success of their work. So in our reflection this morning at Portlaoise, we rightly remember those Irish men who died in the Great War of 1915 and 1918. Remembering them however is not sufficient.

Remembrance must at all times be tempered by a determination to prevent future conflict. As citizens of a free country and as citizens of a free Europe, each and every one of us has an obligation to help build a peaceful future for ourselves and for our children. We do so by being active citizens in our local community and by playing a full part in the civic and political life of our country.

This memorial is a special place of reconciliation for those who revere the memory of our dead and believe in the cause for which they died. Our silence here in Portlaoise this morning is as much about the future as it is the past. A future where justice, peace and respect for human rights can flourish and prosper. In the words of the GFA “the achievement of a peaceful and just society will be the true memorial to the victims of violence and war.”