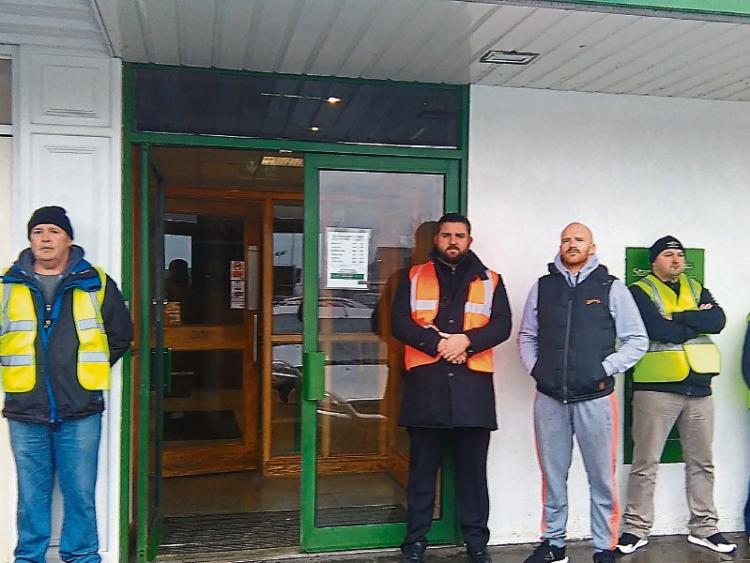 A Portlaoise group formed to stand guard in Lyster Square against what they claim is a gang of non Irish criminals, has rapidly grown to 20 members.

'Guardians of the Elderly and the Vulnerable' was formed a fortnight ago by body building shopowner Darren Fogarty, after an elderly couple was followed and a purse snatched and then thrown away, after the couple ran after the thieves.

“I was disgusted that this attack happened in broad daylight,” Mr Fogarty told the Leinster Express last Friday, standing at the post office.

His post about the theft on social media got such a strong response that he formed the group, now standing daily outside banks, the post office and shops in the square.

He claims there is a gang of 12 to 15 non Irish people following pensioners to rob them.

Though Mr Fogarty said on social media that “they will be tracked down and hunted like animals,” he denied that they were vigilantes.

“Vigilantism is about pursuing justice, we’re not about that. We’re just here to act as a deterrent, so that the elderly people can come in peace, go to the shops, have a cup of tea, get their pension, we don’t want any trouble,” he said.

They have not yet notifed the Gardaíof their formation.

“They are showing a presence in the area today which is quite good, we are hoping to sit down with them and work out something,” he said.

He has vetted members.

“We don’t want anyone from a criminal element, turning up to look for trouble, we’re not about that,” he said.

They will not be making any citizens arrests.

“If we do see a crime in progress we will notify the gardaí,” Mr Fogarty said.

Asked whether his group might themselves be intimidating to the public, particularly non-Irish people, he said “this is not a foreign attack”.

“We are interacting with the public, helping old people to and fro from their cars,” he said, vowing to continue “as long as it needs to be”.

Shopkeepers and the public are “100 percent fully backing it”.

“The response we’re getting from the old people, to see the smiles on their faces, that’s worth a lot to me. One old lady told us today that she hasn’t been on the town in six months due to an attack she had received,” he said.

On leaving peacekeeping to Gardaí, he asked “Why has this not been done already, why is this going on for the last two and a half years?”.

Kickboxing coach John Ging is one of the volunteers.

“My motivation here is people can feel safe walking around. The last thing I want is my father to be here and get mugged or robbed. No person or pensioner should have to go through that, and live with that fear,” he said.

Ex soldier Martin Sludds is another volunteer. “To stand here, it’s so humbling, since 9am people are coming up and saying, 'it’s great to see the likes of ye here, instead of the robbers'. 90 percent of people, that’s what they are saying. They are afraid of their lives. There was a woman crying here this morning, she said it’s so great to see ye here, I’m not afraid any more. What is this country coming to, if this is what has to happen for people to feel safe in their own town,” he said.