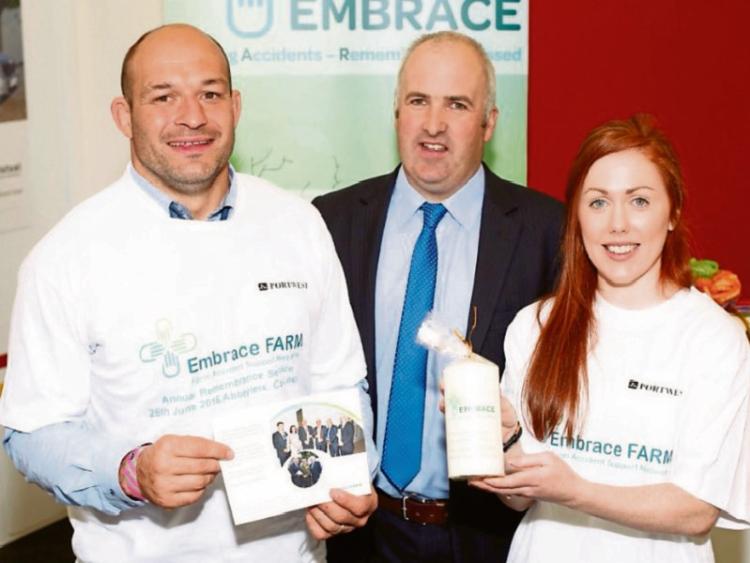 The annual Embrace Farm Week Remembrance Service was launched at Balmoral Show on May 11 on the Ulster Farmers Union/NFU Mutual Stand.

The launch was attended by a large number of Agri VIP’s from the farm organisations, HSENI, Harper Adams Ireland, agribusiness leaders and the Agri media.

Brian and Norma Rohan thanked Barclay Bell and the Ulster Farmers Union, Martin Malone and NFU Mutual for hosting the launch on their stand.

He also thanked Keith Morrison, Chief Executive of the Health and Safety Executive Northern Ireland (HSENI) and Michael Reid, CEO of the Young Farmers Clubs of Ulster for their support in launching this event at Balmoral Show.

They also thanked Sinead McLaughlin, former Tyrone Ladies Football captain who lost her Dad, Cathal in a farm accident and Rory Best, the Embrace FARM Ulster Ambassador for their support at the launch of this year’s Remembrance Service.

Embrace Farm was founded in 2014 by Brian and Norma Rohan, following the death of Brian’s Dad Liam on the family farm in Shanahoe, in 2012 to provide a bereavement support group for farm families who, like them, have lost a loved one or, indeed, suffered serious injury in a farming accident.

Brian Rohan said “we hold an Ecumenical Remembrance service on the last Sunday of June each year to remember those lost and seriously injured on the farms of Ireland.

“Our third annual service will be on Sunday, June 26 this year in in the Church of the Most Holy Rosary, Abbeyleix.

“In addition to this year’s service we are adding a family weekend for young children who have lost either their Dad or young sibling in a farm accident.

“The purpose of this weekend is to do something fun with the kids and bring families from similar situations together in an attempt to help them connect with each other and share their stories. ”

“ Embrace FARM has no dedicated funding, we have been very fortunate to have benefited from many fundraisers organised by kind supporters.

“This funding along with some very generous donations from Agribusiness is helping to finance the family weekend and Remembrance Service.”

Brian Rohan went on to say that “they would be very grateful to the agriculture industry if you could help us out financially and through your marketing departments to help get the word out about the Remembrance service.”

So far this year there have been four farmers killed in the Republic of Ireland. In January a farmer in Kilkenny was using a loader and a basket when the fatal accident occurred. His son was also injured.

In March a farmer died in a farm accident in Mullahoran, Co. Cavan. The accident involved a tractor and the man was working alone.

For example, in 2016 the causes have been a fall, a man crushed by a vehicle attachment and a man killed by a bull.

In 2015 the causes were the same ... a fall, a bull, a quad bike incident and crush injuries from vehicles or attachments.

These are not just statistics, there’s a story behind each one of these numbers, there’s a grieving family left behind, a community in shock, a farm that needs to continue being farmed no matter what’s happened, possibly a widow having to pick up the pieces and not knowing where to start.

Perhaps there is a young son or daughter having to take over the reins a little too early without a mentor.

Maybe there’s a family in disagreement or lost, not knowing what to do with the farm because there’s no will in place, maybe bank accounts are frozen so how does the family have an income, how are cattle to be fed, how will the bills be paid?.

There are state authorities who have to legally complete an investigation by interviewing family and those who witnessed the accident.

These are the immediate things that happen in the days following a tragedy on a farm that a family has to try come to terms with.

These are the practical things that Embrace FARM wants to help and support families with.

A farm accident, whether fatal or causing serious trauma, can leave awful and lifelong consequences.

According to Norma Rohan “even opening up and talking to people is a huge step for some, particularly men.

“We don’t underestimate the size of that step for people but we do know it’s worth it. There’s a lot to be gained from talking to people who know exactly what you’ve been through.

“You get real empathy and understanding and the toll on farm families from accidents has been so devastating that there’s an awful lot of trauma to deal with. ”

If you would like the name of your loved one remembered at this year’s service, please get in touch with Brian and Norma with their name. Tel: +353 (0)85-7709966 or embrace.farm@gmail.com or through Facebook. https://www.facebook.com/embracefarmaccidents