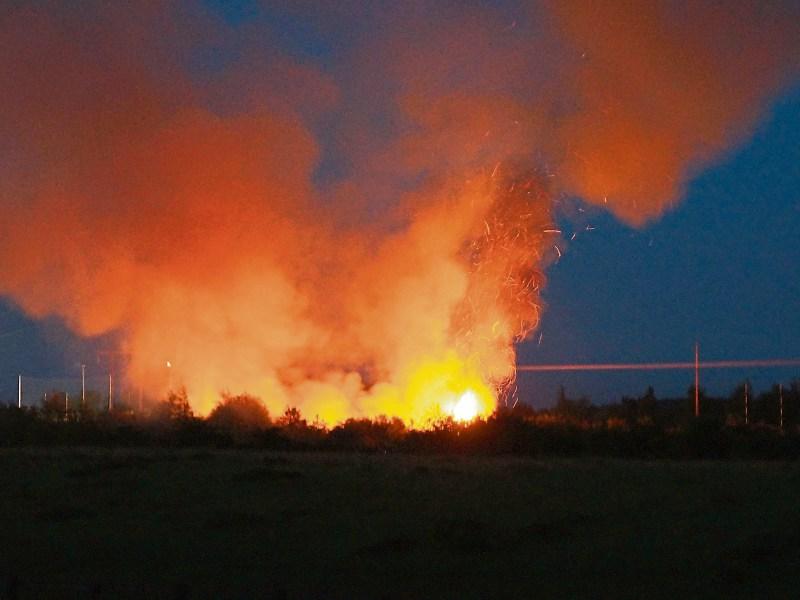 A family living near where rubbish was set ablaze on The Heath is afraid that their home is at risk of fire because of ongoing burning of illegaly dumped rubbish.

On Thursday night June 2 a fire spread over common ground on The Heath, Portlaoise, near the M7 motorway and the GAA club.

Across the motorway lives mother of four Pamela Byrne. Her partner Paddy Fitz-patrick says their dogs alerted them to the fire.

“I went out to see what was making them bark, and all we could see was the whole common on fire,” he said.

“They were out within 15 minutes, they had received calls from drivers on the motorway too,” he said.

The blaze was yards from trees at the road.

“The trees would have gone up like a tinder box, and a breeze could have spread the fire to our side of the motorway. It could have been a disaster,” he said.

“We had the car in the yard ready to go with the children. We were just lucky,” he said.

Sheep graze in the area but were moved out that night.

“They would have died. The next day cinders were all over the ground on our side and we are surrounded by trees,” he said.

Laois Fire service say they blaze was out in an hour, and probably was deliberate.

“The call came at 10.50pm, Portlaoise station attended and were back by midnight. It is unusual for an incident like this to be accidental,” said Assistant Chief Fire Officer Anthony Tynan, urging caution at lighting outdoor fires.

Mr Fitzpatrick is concerned of a repeat fire.

“Dumping happens regularly. I want the council to take action and do something. This is public land but that doesn’t give a right to dump,” he said.

The state owned land is managed by the OPW.

Cllr Tom Mulhall says the council is doing all it can to clear dumped rubbish but the problem is worsening.

“It’s not just on The Heath, it’s widespread. Yesterday a bouncy castle was removed from a ditch in Morette. I am daily reporting rubbish to the environment section who are doing all they can.

“Laois has three litter wardens, they are flat out. The OPW is working with them and is very effective. People are brazenly dumping on the side of the road but it’s a new thing to set fire to them. I totally condemn it, the danger of fire spreading in this dry weather is very serious,” he said.