Large crowd turns out for 'C'mon The Town' launch 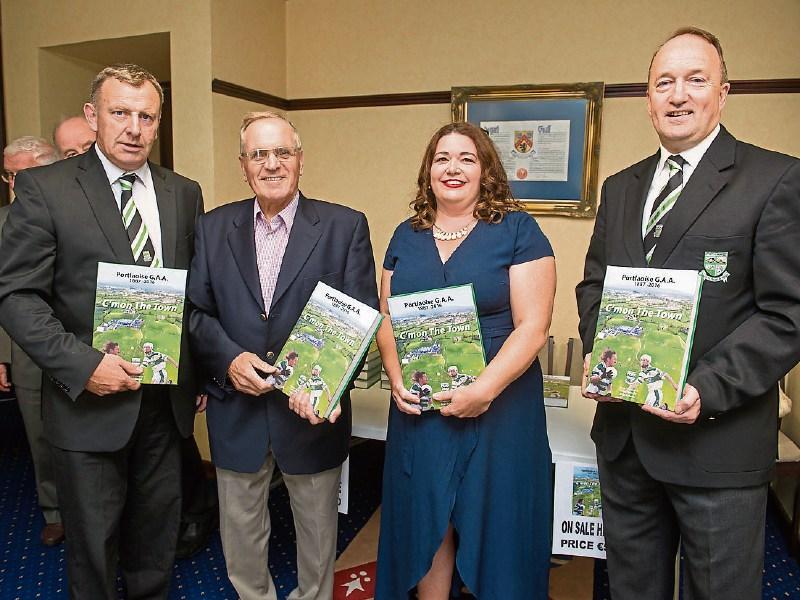 In his introductory comments, Club Chairman John Hanniffy paid tribute to the work of co-authors, Teddy Fennelly and Brian Delaney.

"The book conveys a sense of place and time, there are so many stories and characters captured in it. Portlaoise GAA Club has contributed much to the town of Portlaoise and has provided purpose and enjoyment to people," noted Mr Hanniffy.

Teddy Fennelly said that both he and Brian Delaney had a particular interest in the club, having been born and reared in it.

He thanked the County Library and librarian Bernie Foran for her help, noting that Portlaoise GAA had practically no meaningful records.

Teddy noted that the occasion was tinged with sadness with the loss of three club members within the space of 24-hours the previous week. These included Jimmy Fitzpatrick who helped greatly with the book.

He thanked John Phelan from Borris-in-Ossory, who is writing the Laois GAA Bible, journalist Seamus Dunne, and photographers Alf Harvey and Denis Byrne.

Teddy paid tribute to John Hanniffy's work over the past few years.

Harking back to the early days, he said that Portlaoise got off to a great start in 1889 when Laois won the Leinster Final. At that time the county team was represented by the champion club, which was then Maryborough. Also of note the semi-final and final were played on the one day, a feat not to be repeated anytime soon. Brian Delaney thanked Print Central, and Eamon Fennelly for his contribution on player profiles.

He drew attention to the club's record during the 1980s, "a decade to remember" which takes up 67 pages in the publication. It was a decade in which county and Leinster titles abounded for Portlaoise in both disciplines, and the senior footballers were All-Ireland club champions in 1983.

Council Cathaoirleach, Catherine Fitzgerald, a life long club member, said that Portlaoise had established itself as one of the best clubs in the country. She noted the voluntary ethos which had underpinned it. There had been difficult times, but as she noted, "we were poor but proud."

The book was a great resource and was eagerly awaited by everyone, and particularly those living abroad.