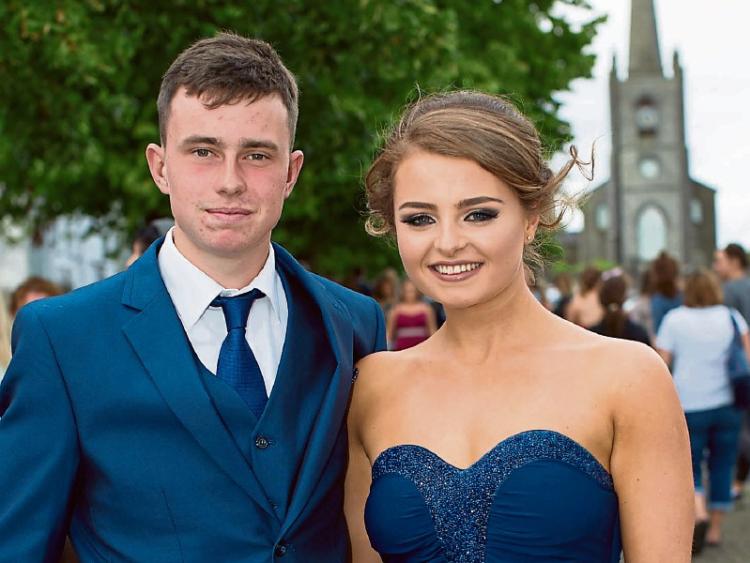 Shanahoe Ladies footballer Emma Finlay left a Debs night to play in a semi-final game, and is taking the resulting national fame in her stride.

After spending the day getting dolled up to attend the St Fergal's College, Rathdowney, debs with her friend Craig Saunders, Emma aged 18 from Clough switched from her dress to football gear straight after the photos.

She left before the meal, and drove an hour away to take to the pitch in Crettyard, in full make-up, fake tan and a hairdo held solidly in place with “a few boxes of clips”, last Monday August 8.

“I looked dodge, I’ll tell you the truth. Not your typical match attire I can tell you,” she joked while on the phone to RTE’s Ryan Tubridy afterwards.

Emma was playing in corner back position for Shanahoe in the Laois People's First Credit Union Intermediate Championship semi final. She explained why she did it.

“After training from February onwards every week and you're nearing your goal you don't want to give up your opportunity to reach it, the night couldn't have gone any better and no doubt I'd do it again,” Emma said.

After a firm 3:11 to 0:1 victory against Graiguecullen, it was back to celebrate at the Debs for Emma, who changed back into her dress in the physio room.

“Don’t tell the trainer but I had to stop at McDonald’s on the way over, I was starving,” she said.

National papers, online media and RTE picked up on her uplifting story. Emma was stunned at the attention.

“It was very very unexpected,” she told the Leinster Express.

She is delighted she made it back to the debs, returning in time for dancing at 11pm, to rejoin Craig and party till dawn.

“I was on a high going in. It was a very good night afterwards, I'm glad I didn't miss it,” she said.

A dedicated footballer, Emma is playing with Shanahoe Ladies since she was eight. Her three sisters are also heavily involved in the club, with herbig sister Laura captaining their team. A past pupil of Clough NS, she credits the school for her love of sport.

“It’s a school which really encourages the girls to be as involved in sport as the boys,” said Emma, who is now going into her Leaving cert year in Presentation Secondary School Thurles.

The busy girl is spending the summer working in First Ireland Spirits in Abbeyleix.

“Well done to Emma who left her debs this evening to help Shanahoe to an emphatic 3.11 to 0.01 win against Graiguecullen in the Laois People's First Credit Union Intermediate Championship semi final. Emma played a starring role at corner back. Hats off to Emma for her commitment to the team! Enjoy your night,” the club posted.

She is a daughter of Joan and John Finlay, who is well known in IFA and political circles. “The joys of youth,” her father quipped to the Leinster Express.