Tears of joy in Port as new chapter opens 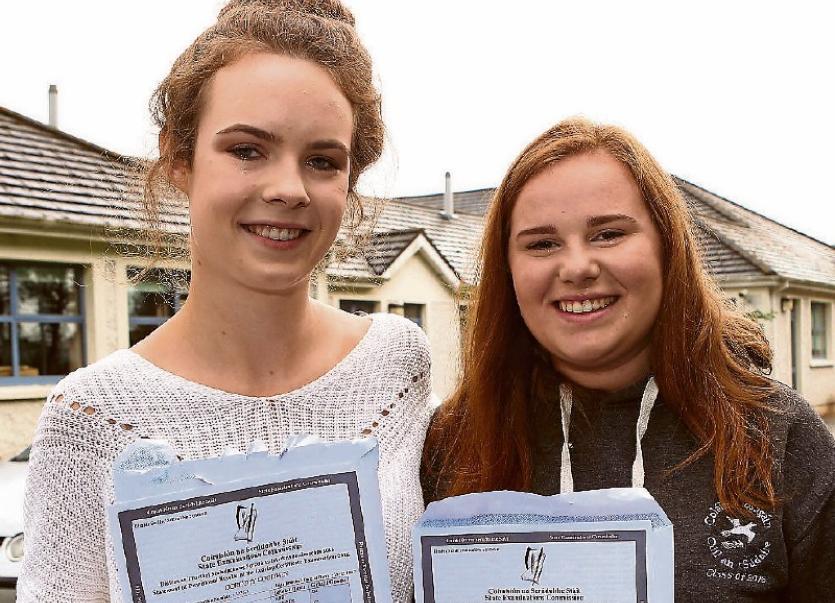 Around 14 years ago Dorothy Goodwin and Jessica Kenny started as the only two girls in a junior infant class at Sandy Lane NS in Portarlington.

And last Wednesday morning they were still side by side celebrating in tears with their mothers, Joan and Janet as they completed their secondary education with some of the highest marks achieved in 2016 at Colaiste Íosagáin.

Dorothy is aiming for Science at UCD while Jessica is off to become a nurse.

Hazel Gorman from Vicarstown, a former student of Rath NS, was “thrilled” with her results, especially in Biology. Her mother Pauline was there with her and equally excited with the exam results.

Kayleigh Woods, from Port, sat the Leaving Cert Applied exam which she said was more “hands on” with the practical experience offered in work. Kayleigh will be applying to join the Irish Army in September. She also wants to emulate Katie Taylor and box for Ireland.

Nadine Thompson, was “a little bit disappointed” but knows she still has options, like teaching.

Katie Whelan was happy with her 400+ points and hopes to study commerce at NUI Galway.

Katie Ward got a distinction in the Leaving Cert Applied and wants to go to study business and retail managament.

Budding mechanic, Evan Haverty also got what he wanted. Evan, from Walshe Island, was with his mother to collect his results. He has been working part time in Portarlington Autoparts and will now go on to study mechanical Engineering at Portlaoise College.

Polish native Sergiusz Knapik was happy with his 300 points. He does not plan to go to college straight away but wants to get a job. “Ah, we'll see how it goes,” he said.

It was mission accomplished for Hannah McEvoy, from Port, who had to repeat this year after a bad result inMaths in 2015. Repeating was “absolutely worth it.”

“My main mission was to pass everything and that is done. I thinking of doing childcare,” she said.

Port resident but a native of Wales, Niall Rowlands, was delighted with is C1 in Irish and honour in higher Geography. “I played it a bit too safe,” he said.

He moved to Ireland in 2005. His plan now is to do massage and sports rehabilitation.

Killian O'Connor could be Port's first graduate in policing the hackers.

Killian hopes his 380 points will be enought to get him a place on a new cyber crime and internet security course in Carlow IT. Plan B is engineering.

Amy Murphy from Ballybrittas, still hadn't told her father when she spoke to the Leinster Express.

Amy got a B1 in Higher Level Maths and with 440 points, she plans to be a primary school teacher by completing a BA at NUI Maynooth following up with a H-Dip.

It is more than enough points to pursue her plan to study for Science at NUI Maynooth. The target was 405 points.

“I should be sorted. I always wanted to do science because I found it the most intertesting,” she said.

Her brother is doing the same course at the moment.

Naoise, is daughter of Pauric O'Dea, co-owner of O'Dea's Pub in Port and Criona a Home Economics teacher in Colaiste Iosagáin.