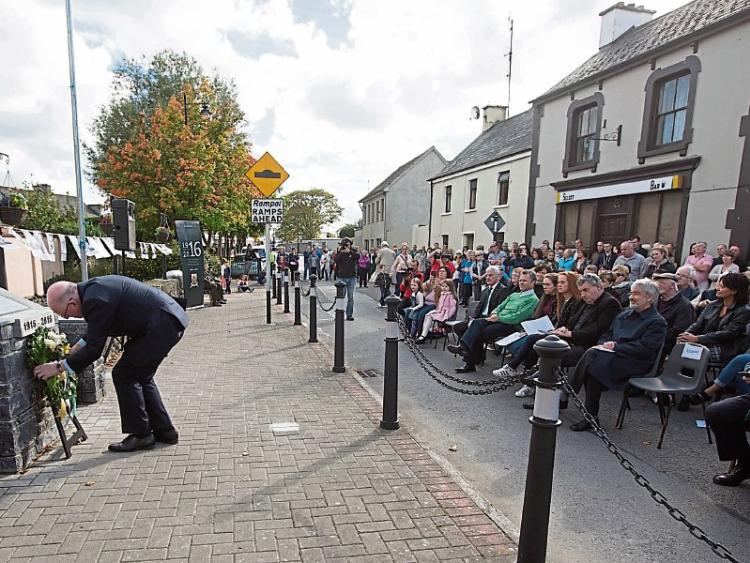 Rathdowney marked its commemoration of the Easter Rising with the unveiling of a plaque and seat at Mill Street, on the banks of the Erkina, last Sunday afternoon.

An afternoon of song and speech saw a wreath laid at the plaque by Minister Charlie Flanagan and the raising of the Tricolour by Hannah Finane and Mark Whelan.

The 1916 Proclamation itself was read by Grainne Moore and Sarah Prendergast, while Barbara Maher took the guests on a historical recap of Rathdowney and some of its most well known residents and places.

Oliver Kennedy thanked the local Tidy Towns and Men's Shed for their work in the project, and Cllr John King for co-ordinating it. He also thanked the sponsors, St Canice's Credit Union, Laois County Council, Supervalu, Bank of Ireland and McCabe's Towbars.

The stone work on the plaque was done by local stone mason, William Aylward, while Jim Holohan did the engraving, and Mick Madden and John Curran made the bench.

Mr Kennedy said the project was a perfect example of community self help working together, as a community, for the community.

He hoped, “this great community effort would lead to a new and local revolution of positive community spirit working together as partners in making Rathdowney a better place to be enjoyed by all.”

The plaque was blessed by Fr Martin Delaney PP and Rev Seymour Whiteley.

Following the event, local poet Michael Creagh took the guests on a walking tour of the town, recalling places and people that feature in his first book of poetry, 'Rhymes of a Rustic Boy.'

Aided by host of young local actors in costume he recited his poetry and recalled personalities such as Jackie Malone and Mary Farrell and places such as the Coliseum Cinema and local mart.