Ballyfin Demesne chosen as Best Hotel in the World

Ballyfin House in Laois, has just scooped the Best Hotel in the World award in the Conde Nast Traveller Readers Choice awards, making it the number one choice in luxurious hotels. 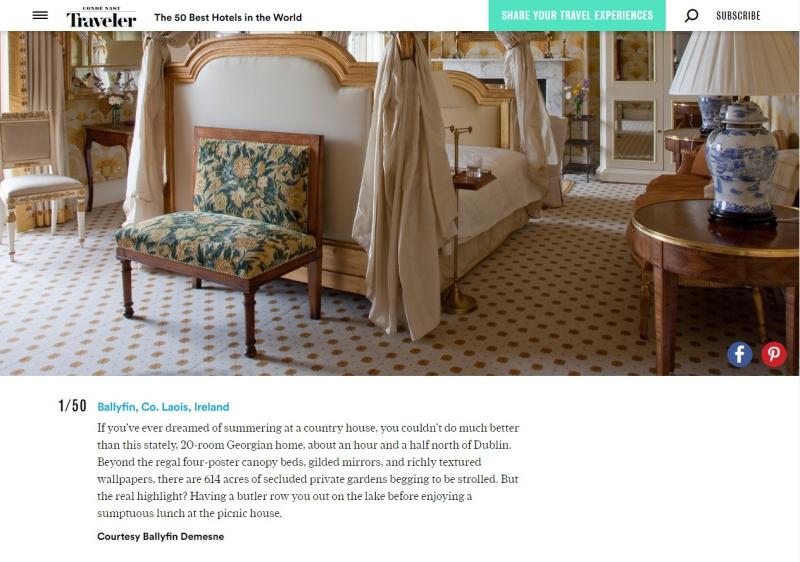 Management at Ballyfin Demesne, the restored 19th century manor and former boarding school, are "proud, thrilled and excited" to win the accolade, which no doubt will entice many more luxury seeking international tourists to Laois.

The hotel announced their win on social media last Tuesday October 18.
"Fantastic news, we are so proud, thrilled and excited, thank you," management said on their facebook page.

More than 300,000 of Conde Nast’s luxury travellers - nearly twice as many as last year - submitted millions of ratings and 75,000 comments to its 2016 Readers’ Choice Awards survey.

“Your responses are the most powerful measure of what’s happening in the travel industry." Conde Nast said.

Two more luxury Irish hotels made the top ten, with Waterford Castle, which sits on its own 310 acre island, at number 7.

The Lodge at Ashford Castle in Mayo, which received a $75 million makeover in 2015, came in at number 9.

Ballyfin was built as a luxury home by the Coote family in the 19th century. It was later bought by the Patrician brothers who ran a boarding school there for many years.  It was then sold to American businessman Fred Krehbiel who invested millions to painstakingly renovate it to its original glory over 9 years, opening it as a luxury hotel in 2011.

Conde Nast say "If you’ve ever dreamed of summering at a country house, you couldn’t do much better than this stately, 20-room Georgian home, about an hour and a half north of Dublin. Beyond the regal four-poster canopy beds, gilded mirrors, and richly textured wallpapers, there are 614 acres of secluded private gardens begging to be strolled. But the real highlight? Having a butler row you out on the lake before enjoying a sumptuous lunch at the picnic house".

Among the luxury seeking guests who have stayed at the hotel are Kim Kardashian and Kanye West on their honeymoon, taking surprise trips to the cinema in Portlaoise during their stay.

"It was like stepping back in the past without the inconvenience of no electricity. The personal attention ... the welcome of the people, the setting, the food, I should be their PR manager," he said.

See all the winners at http://www.cntraveler.com/rca