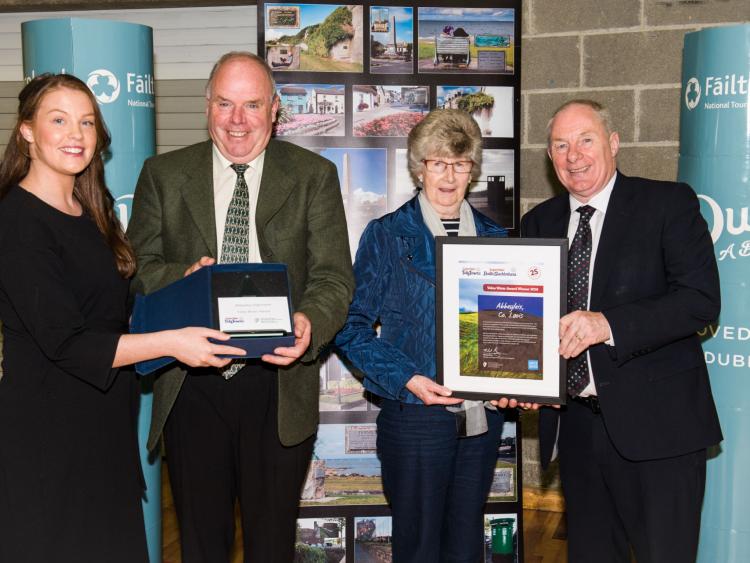 The Abbeyleix community is actively involved in the Green-Schools water programme and pursues best water conservation practice through education at local schools. Water and sewerage systems were updated in 2014 and a water harvesting system was installed by the Tidy Towns Committee in the local allotments in 2015 to provide a free and sustainable source of water from a nearby stream.

Commenting on the Value Water Awards, Dr. Roisin Bradford of Irish Water said “Congratulations to the Abbeyleix Tidy Towns group on winning the Irish Water Value Award for Best Small Town in the East and Midlands region. Irish Water is very proud to sponsor the Value Water Awards for a second year which we hope will lead the way in inspiring water conservation at a local level. The work the Abbeyleix Tidy Towns group has carried out to win the award is truly inspirational from updating water and sewerage systems in 2014 and installing a water harvesting system in local allotments in 2015.

“We are particularly encouraged to see the inclusion of young people in the Tidy Towns committees as many of the projects undertaken by the winning towns have involved a great effort by local school children. Working with students is an important step in educating young people on the importance of water conservation. Irish Water works closely with the Green Schools Initiative which educates children on the importance of water conservation and with the Value Water Awards hopes to further assist communities in cutting back their water usage.

The Abbeyleix Committee also collected its Tidy Towns Gold medal and county award at the Tidy Towns in Skerries Community Hall Co Dublin where the national prize was presented to Skerries Tidy Towns.