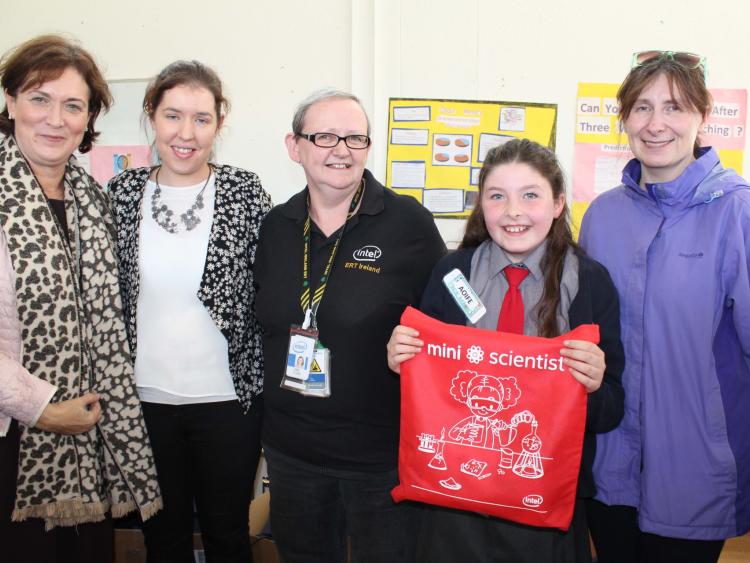 The small school recently held its fifth annual Intel Mini Scientists Fair, where a wide range of exciting projects astounded their parents and Intel Judge Ann Tilson, who chose the winner to go on to the regional event.

This years Scoil Mhuire Fatima is hoping to win three in a row, with Aoife Fitzpatrick from 4th class, chosen to represent them at the regional event.

Aoife's project 'Colour Memory' involved a study of how the colour of a particular text and its’ background can improve one's ability to memorize information.

The standard of science project on view reflected the strong enthusiasm for science that exists within the school. A diverse range of projects was on view by students of 3rd, 4th, 5th and 6th classes.

6th class has gained tremendous mini scientist experience, having taken part for four years and according to class teacher Michal McEvoy “they couldn’t wait to put all that on show”.

One of the many attention grabbing projects on display was 'Ditch D' Distractions' by Oisín McDonald and Dylan Grouse, a project about distractions for drivers, chosen as runners up.

'Fruiteria' by Jamie Boyle and Niamh Fitzpatrick was a study of bacteria on fruit and the pros and cons of washing fruit before eating.

There were projects assessing the health benefits or risks of Pokemon Go, by Adam Farrell and Moarij Adnan and the exercise benefits, if any, of WII fit, by Oisín Ramsbottom and Enda Shortall.

'Designing My Own Harp' by Cillian Moran involved the harp making process and the science behind it. The award winning harper played some tunes for an appreciative audience.

Jacob Price O'Reilly's 'Chewy Brain' proved ‘Does chewing gum make you concentrate better?  Intel judge Ann Tilson was so impressed that she asked Jacob for his powerpoint presentaion to share with Intel HQ.

Jodie Lennon, Megan Delaney and Eleanor Cahill did an interesting study on eye colour and whether a particular eye colour had superior vision.

Fifth class class projects were, according to class teacher Anna Moore “a fabulous display of months of very hard work”.

David Duggan, Eoin Shortall and Callum Maher exhibited 'Bee-lieve It or Not', a look at the science behind honey. Colm Buggy and Rian Maher explored dental hygiene and the behaviours involved among students in the school. Nathan and Mary George studied Barn Owls while Jack Hyland used 'Potato Power' to energise the judges.

Anna Duff and Sophie Phelan examined the bacteria on mobile phones in the hilariously titled project 'Manky Mobiles - Does your phone ming or ring?'. Sophie Mae McDonald and Emma Killen used their insight to do a great project on the causes of asthma.

Caoimhe Ramsbottom, Sadbh Mc Donald and Hermeen Adnan were prize winners with their project called 'Milktastic Plastic', on how plastic can be made from milk.

'All Fired Up' was by Sarah Doyle and Orlaith McNamara who made their own fire lighters from recycled materials. Niamh Doyle investigated the merits of exercising for Cystic Fibrosis sufferers. A very interesting project with major scope for development.

Rachel Mangan and Rebeka O'Mahony did a great project on 'TV and Me' a study on how your behaviour is effected by what you watch on TV. Laura Miller and Mairead Foyle launched 'Handy Health', an app design to help people remember when to take their medication.

Fourth class had eagerly awaited their opportunity to put their scientific brains to work in the Intel Mini Scientist Fair and they didn't disappoint.

Kate O'Connell and Doireann Moran investigated the impact of the brain on left and right dominance in the project “Are you left or right sided?”. Rhys Kelly and Odhrán Maher’s project “Why do we need dogs?” Abi Kelly and Caoimhe Rothwell produced a beautiful project on the animals of the sky in “All about Birds”. “Ice Cold” by Pauric Ramsbottom, Cathal McDonald and Alan Bennett investigated the substances that would melt ice the quickest.

Clodagh Cooney and Emma Rouget had their class in knots about their project on “Flexibilty”. Hands, nails and bacteria was the subject of Aisling Ramsbottom and Meabh McGrath’s project. PJ Daly, Luke Devitt and Liam Daly received a highly commended certificate for “How much grease is in crisps?”

Raiyyan Omer wowed the judges with his experiment on “How does liquid iron re-act to a magnet?” Isabella Smith had a brainstorm of a project called “Hurricanes”.

“Fourth class thoroughly enjoyed the Science Fair and are now excited to help and support their classmate Aoife in the Regional Final," said their teacher Anne Mathews.

Third class, under the guidance of teacher Aine Costello got their first taste of science fair action with their wonderful project on the organs of the body.

Anne Tilson, the Intel judge found it hard to pick a winner from what she described as “an astonishingly high standard of competition”.

The two day event was well attended by proud parents, grandparents and friends.

"The Intel mini-scientist competition will continue to be a permanent fixture on the school calendar such was the sense of achievement and satisfaction," said Principal Ann Bergin afterwards.