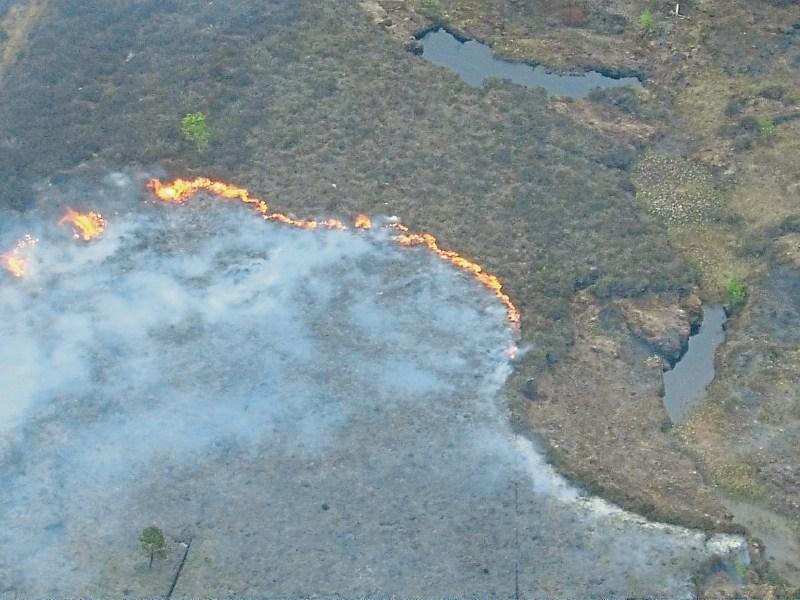 The deliberate burning of illegal dumped rubbish is suspected to be the cause of a fire near Portlaoise that had the potential to last for days, and which marked a start of a hectic few days with wildfires for the County Laois Fire and Rescue Service.

To help with the problem, the fire service availed of help from Laois Civil Defence whose drone was called in to help tackle one of the blazes at the weekend.

The fire service confirmed that it contained the fire at Togher bog near Portlaoise which it believed was sparked by the deliberate lighting of a fire on open bogland, covered in dry vegetation.

The service suspect the blaze was caused by someone who dumped a load of rubbish, and then set alight on Thursday afternoon. They have reported the incident to the Gardaí for investigation.

A number of fire services vehicles were called to the scene. As a result of the dry weather conditions the fire spread quickly to the surrounding area, but the quick response of the fire service ensured it did not spread.

Anthony Tynan of the Laois Fire and Rescue Service said there have been many instances of rubbish fires, but he warned that any fires at present have the potential to spread because of the windy and dry weather conditions.

Because of where the rubbish was dumped, Mr Tynan said the fire had the potential to spread into areas of bog which, if ignited, could have lasted for days and be very difficult and costly to extinguish. He urged everybody to be cautious in current weather conditions when it comes to lighting any type of fire outdoors.

Meanwhile, units of Mountmellick and Portarlington fire Brigades battled a bog fire at Garrymore on Saturday, May 6.

The blaze was eventually extinguished with the help of Laois Civil Defence which deployed a drone to help.

Meanwhile, on Sunday, a bog/forest fire at Kilbricken was attended.

"Under extreme Fire Risk Conditions any ignition source in hazardous fuels will give rise to rapid and unpredictable wildfire development and spread.

“Under these conditions, in upland situations fire can be expected to cover extensive areas and pose extreme difficulties to suppression efforts and may potentially likely give rise to Major Emergency scenarios," said the warning.