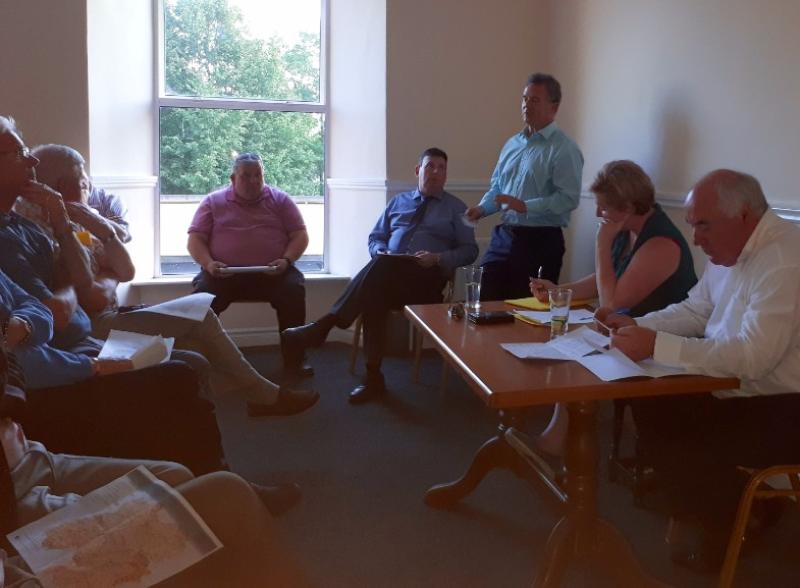 Fianna Fáil will not mount a big protest to keep Portarlington in Laois or Offaly at Dáil elections after being told that TDs will sanction the move of the town to South Kildare.

Instead, the party intends focusing on getting a TD elected in the enlarged Kildare constituency. Some 12,000 people in Laois and Offaly in Portarlington and hinterlands will move to Kildare under the Constituency recommendation.

Fianna Fáil members in the Portarlington and further afield gathered in the East End Hotel this week to discuss how to respond to the move which will see Kildare South getting a fourth TD.

Anger at the meeting in the East End Hotel evaporated after Sean Fleming TD and other speakers said there was little chance of the Dáil voting against the recommendation.

"I'll be up front with you. I don't think there is anything we can do about this," the Laois TD said.

The only thing that could prevent such a change was a snap election he added.

A number of speakers had highlighted the possible impact of the move. Fianna Fáil cumann secretary Deirdre O'Connell Hopkins said she had looked for research about how such changes affect towns like Portarlington but could find none.

She asked: "What is going to be the net effect? Are we going to be left as the poor cousins?"

Joe O'Dwyer said he was 'incensed' when he read the commission's report. He said it was further proof of a decline in the town's fortunes.

"Portarlington has become the forgotten town," he said.

He said Port had lost many of its big employers and now is a commuter town. He said Port had not benefited from population group and 'not even one footballer' had been gained for the local GAA club.

"The only thing we have left is the car park up at the train station," he said.

Mr O'Dwyer and other speakers called for some form of public protests to be mounted to fight against and stop the move into Kildare.

Another view was that the change could be halted in Leinster House if parities voted against the recommendations.

Thomas Foy of Laois Ogra FF also said that while part of the reason for the move was due to the Fine Gael led Government's decision to cut the number of TDs.

While all speakers attacked the changes, a majority felt it was a wast of time to fight a battle that could not be won.

Brendan Flanagan proposed that both sides of the town unite to return a TD the would represent the area.

Stephen Mather said there was a big block of votes in Portarlington and surrounding areas - enough to return a TD for the town.

Cllr Paschal McEvoy agreed and said it is time to put resources into winning a seat.

Cllr Eddie Fitzpatrick fell 170 votes short of winning a second seat for Fianna Fáil. He told the meeting he was willing to run in Kildare South.

"We need some sort of national representation to bring jobs back to the area," he said.

Laois County Council Cathaoirleach, Cllr Padraig Fleming said that while Port would move to South Kildare, a protest must be lodged.

Meeting chairman Willie Murphy accepted a proposal that letters of protest be written to the relevant Government Minister, Constituency Commission Chairman and others.