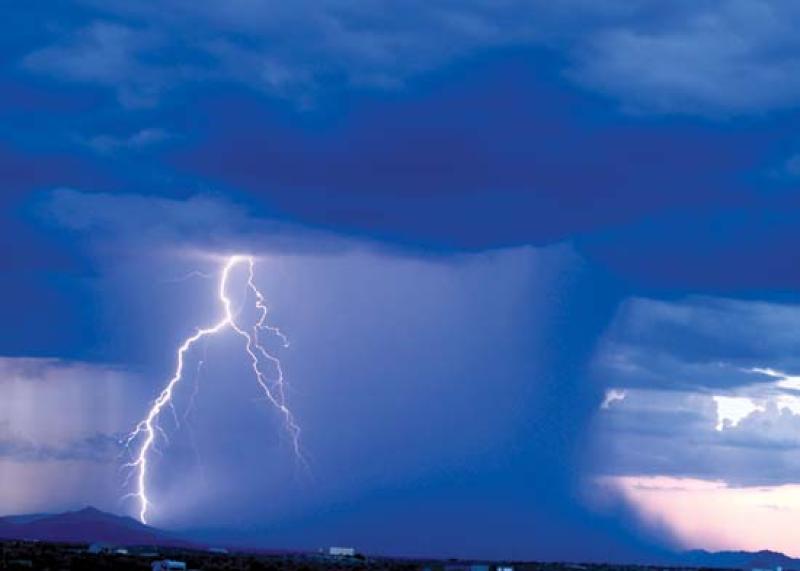 The fine spell is set to end with a bang as weather warnings are issued for thunderstorms with a high risk of spot flooding.

Met Éireann has issued Orange and Yellow warnings for much of the country with up to 40mm of rain possible in places.

An Orange warning has been issued for counties bordering Laois while Laois itself is subject of a Yellow alert.

Met Éireann says Carlow, Kilkenny and Wexford are at high risk of thunderstorms for the rest of Tuesday evening and tonight with a risk of localized flooding. The greatest risk along the south coast. Rainfall amounts are uncertain. But between 30 and 40 mm are possible.

The warning is valid from Tuesday 18 July 8pm  to Wednesday 19 July 6am.

Met Éireann says there is a moderate to high risk of thunderstorms tonight with a risk of localised flooding. Rainfall amounts uncertain but between 20 and 30 mm possible

The Yellow warning is in place from valid to Wednesday 19 July 6am.

Met Éireann says it will remain close and humid tonight with lows of 14 to 17 degrees in moderate southeast breezes.

Heavy thundery rain will affect many parts of the country on Wednesday morning. In the afternoon /evening there will be a slow clearance from the west. Highest temperatures of 17 to 20 degrees, but becoming fresher by evening as blustery northwesterly winds develop.

The outlook for the next few days will be dominated by a low pressure system close to Ireland resulting in breezy conditions with showery rain and slightly cooler than in recent days.

Wednesday night will become mostly dry as rain clears the northeast with good clear spells developing but showers will affect Atlantic coastal counties. Lowest temperatures will fall to around 7 to 10 degrees in light to moderate west to southwest winds.

Scattered showers on Thursday morning will merge into longer spells of rain in the west and north later. It will turn cooler with highest temperatures of just 14 to 18 degrees in moderate southwest to southerly wind which will increase fresh and gusty. Showery rain will continue during Thursday night which may merge into longer spells of rain and turn heavy and persistent for a time.

Showery and breezy conditions will continue on Friday with rain turning persistent and heavy at times, especially in the west and north. Staying cool with top temperatures of around 15 to 18 degrees in fresh to strong and gusty southwest winds veering westerly. The showery rain is likely to continue on Friday night.

Westerly winds will moderate somewhat on Saturday and Sunday with scattered showers and some sunny spells. Some of the showers could still be heavy, especially in the north and east. Top temperatures will be in the mid to high teens.