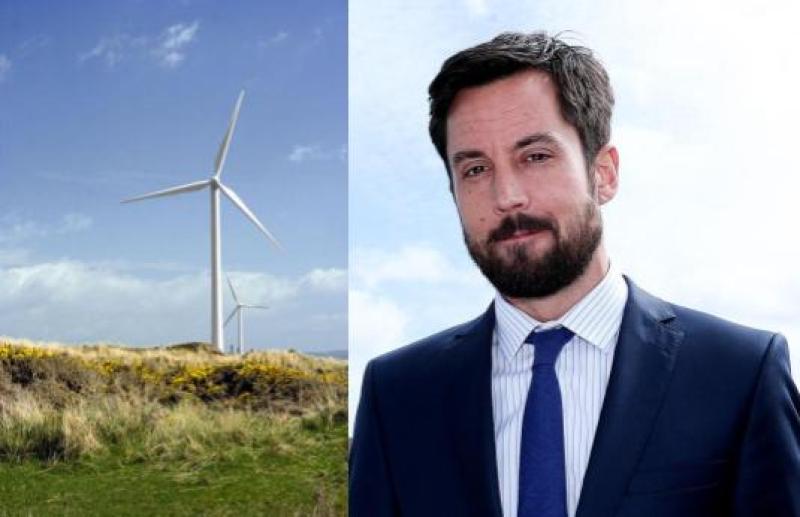 The Minister who played a big role in Leo Varadkar becoming Taoiseach has rejected Fine Gael-led opposition to wind power in Laois.

Minister for Housing, Planning, Community and Local Government Eoghan Murphy has ordered Laois County Council to drop what would be an effective ban on wind farms from the Laois County Development Plan.

Minister Murphy has moved to delete a proposal inserted in the new plan. He has also wants to impose a windfarm map of the county rejected by councillors.

In doing so, the Fine Gael Minster has flatly rejected opposition led by his party colleagues on Laois County Council. Fine Gael's six Laois councillors led the vote in June to ban wind turbines. They were supported by two Fianna Fáil reprepresentive and one Independent.

Minister Murphy has excercised his veto on County Development plans granted under the Planing and Development Map 2000. The draft plan proposed a setback of 1.5kms of wind turbines from schools, dwellings, community centres and public roads in all areas for consideration for wind farm development.

The Minister has also ordered councillors to scrap a map which made nearly all of Laois a redzone for turbine development. The rejected map included virtually no areas preferred for wind energy generation.

Instead, Minister Murphy wants the councillors to adopt a map which identifies a number of areas as being suitable for wind energy.

Laois County Council management warned the councillors their proposals would not be acceptable to the Minister. Management had proposed a map that included designated areas.

The councillors are due to discuss Minister Murphy's order next Monday, July 31. In documentation submitted to them, Minister Murphy says their proposals are "in breach" of the planning and development act.

He said their map would "serveely undermine and negate measures to adapt to climate change and reduce reliance on fossil fuels". The proposed 1.5 km setback is described as 'arbitary' and when combined with the map significantly restrict the potential for wind energy development.

Minister Murphy said "sufficient and evidentially based reasoning" had not been demonstrated in the "significant policy departures from the guidlines on wind energy".