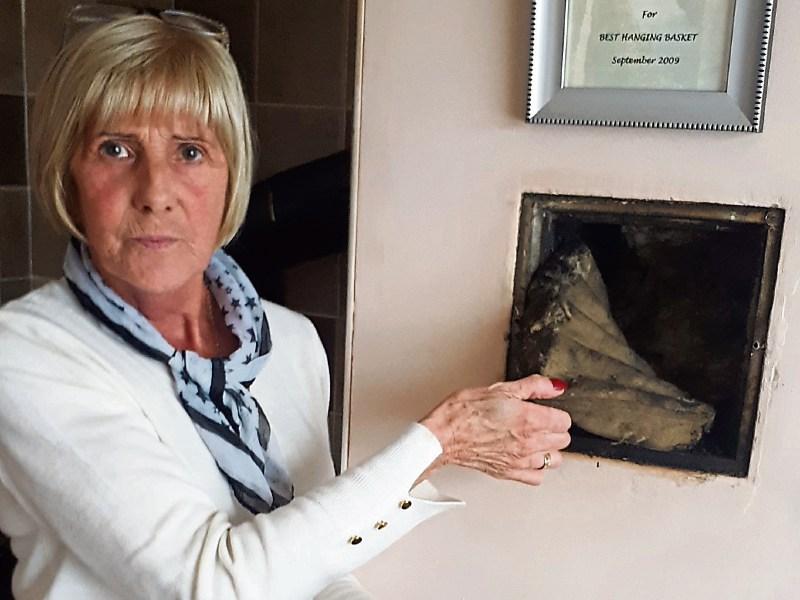 Elderly residents of maisonettes in Mountmellick claim that they are waiting years for the council to do repairs on their rented homes.

There are nine maisonettes in Pattison’s Estate, on the Tullamore road, but many have problems, according to several residents.

Patricia Byrne had personally paid for much of the upkeep on her rented house, up until she gave up her job as a home carer to mind her ill husband.

Now a widowed pensioner, she can no longer afford to pay for repairs, but said the council is not doing necessary repairs.

“I never missed a rent payment in 25 years. I cemented the front yard and put in a fitted kitchen. These are lovely little houses, but the council won’t do anything. The answer I get is there is no funding,” Ms Byrne said.

The houses are 25 years old with solid fuel cookers in the living area. However the chimneys are leaching tar through an access panel, and down the living room wall.

“The tar spills down if I leave the fire unlit for just two days. The smell of it is dreadful. I have to repaint the wall every other month. Something must be cracked. Everyone has the same problem. The council came to look at it and said it needs a new cowl, but that was three months ago,” Ms Byrne said.

A chronic asthmatic, she said she is forced to sleep with her bedroom window closed, because there is a dripping gutter right outside it, and her bed is under the window.

“At my age I don’t fancy getting into a wet bed. I just want them to put up a new gutter as they promised ten years ago,” Ms Byrne said.

Her neighbour who wished not to be named, has similar issues with her gutters. Water drips down both in the front and back of the house even in light rainfall.

Overgrown conifers have also made that back yard impassible for the grandmother, who now keeps her solid fuel inside her home.

Inside her home, the chimney breast is also coated with tar.

“Ten years ago they did the gutter but they didn’t finish it properly. I have no chute so the rain just runs down. I asked the council to cut the bushes, I’m sick of it. I paid a man to cut them last year. I can’t afford it but it’s a case of having to,” she said.

Tenant Ignatious Cooper said he had to fight for any repairs to his maisonette.

“ I had to go to local politicians and the media. The only man who got anything done for me was Charlie Flanagan,” Mr Cooper said.

Laois County Council is planning to build a further ten houses in Pattison's Estate in Mountmellick.

The scheme is to be built at the rear of the housing estate, on council owned land. Architects were tendered for last June.

The council declined to respond to queries over the mainsonette complaints.