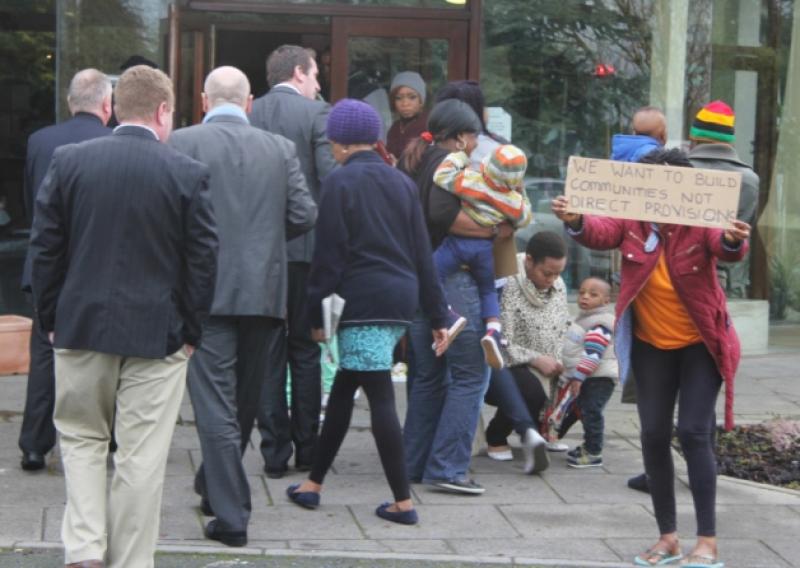 Offical visit to the Montague Hotel.

Allowing people who live at Government-funded refugee and asylum seeker centres in Laois and other counties to work could 'alleviate' the need for such centres, according the the Minister responsible.

Minister of State, Department of Justice & Equality, David Stanton addressed the Joint Committee on Justice & Equality -
Report on Immigration, Asylum and the Refugee Crisis. He works with Laois TD and Minister for Justice Charlie Flanagan.

The former Montague Hotel on the old Dublin Cork/Limerick road near Emo, Co Laois is home to several families. Portlaoise's priest Msgr John Byrne and Fr Paddy Byrne CC have been vocal critics of the conditions of such centres.

Speaking about the Direct Provision and the Protection Process Minister Staunton said centres be for short term use but should not be closed.

"If the system was simply disbanded, already vulnerable people who we are committed to protecting would join the lengthy waiting lists for social housing or enter the private rental market with little hope of finding affordable and secure accommodation.

"Direct Provision guarantees that anyone who walks into the International Protection Office today will have a bed, food, a shower, medical care information and access to a range of services tonight. They will not be forced onto the streets or into emergency housing. I have yet to hear a credible alternative to the current system," he said.

He said the Department also chairs an inter-Departmental Taskforce, established by Government, to examine the Supreme Court judgement on the right of applicants to seek employment.

"Granting access to the labour market, could have significant repercussions for Direct Provision. If an applicant has economic security then the need to be dependent on the State will be alleviated," he said.

Minister Staunton said  Minister Flanagan and himeself are committed to the aspiration of the Committee to bring about real and positive change for protection applicants.