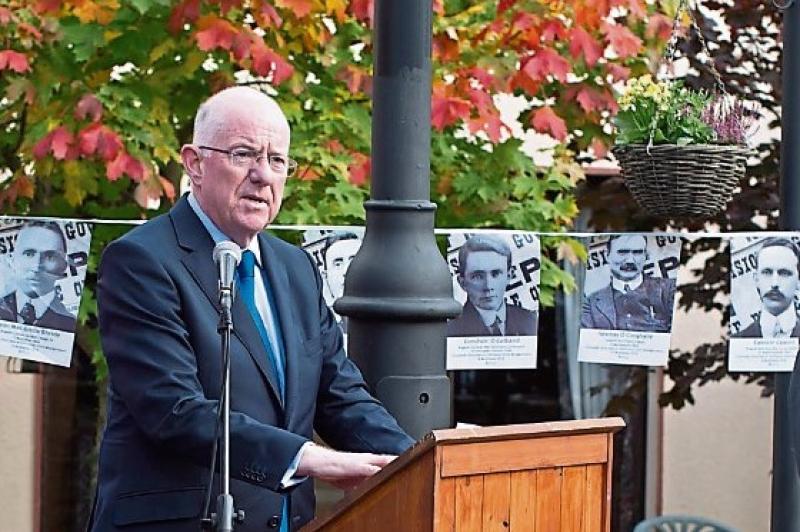 Fine Gael is using Budget 2018 to give everyone in Laois a 'fair chance' and the opportunity to reach their full potential acccording to Laois TD and Minister for Justice and Equality, Charlie Flanagan.

Laois TD and Minister for Justice and Equality, Charlie Flanagan, highlighted what he said were the reforms to the tax system designed to give a little back to those who have made sacrifices during the tough years.

“A big part of this is the reform of the tax system announced today in Budget 2018 and which will really benefit people and families here in Laois. This is something that my constituents have been calling for, and something Fine Gael members around the country have been asking Government to prioritise.

He agreed with his colleague Minister Donohoe the Government cannot protect our most vulnerable citizens and create a fairer society unless work is rewarded and the system of taxation is also 'fair'.

“I am glad that measures are being put in place to change this. We are working towards the goal that people on average wages do not pay income tax at the higher rate. Today in Budget 2018, it was announced that the point at which an income earner attracts the higher rate of income tax will rise next year by €750 per annum, from €33,800 to €34,550," said Minister Flanagan.

Changes to USC that reduce the rates do not narrow the USC tax base. The entry point to USC will remain at €13,000.

“The USC rate of 2.5% will reduce to 2% and the ceiling for this new rate will increase from €18,772 to €19,372. This is to ensure that full-time workers on the increased minimum wage of €9.55 per hour do not pay the upper rates of USC. We have also been consistent about removing low and middle income earners from the USC net since we came into office in 2011.

“The 5% rate of USC is also reducing to 4.75%, which will reduce the top marginal rate of tax on income up to €70,044 to 48.75 per cent. This is the fourth Budget in succession in which this marginal rate has been reduced.

Minster Flanagan said self-employed people and families with small businesses would be helped in Laois  by increasing the Earned Income Credit by €200, bringing it to €1,150 per year from 2018. Minister Flanagan said this is further progress along the road to tax equalisation for the self-employed, something Fine Gael has prioritised across a number of Budgets now.

“We want to ensure everyone has the opportunity to work and we must ensure that being at work pays. Measures in the Budget to support this include the increase in the earnings disregard for the One Parent Family Payment and the Jobseekers’ Transitional scheme by €20 per week; an increase in the threshold for receipt of the Family Income Supplement by €10 per week for families with up to three children; and an increase in the weekly rate of the qualified child payment by €2 per week. These measures will come in from the last week of March next year.

“The increases in social welfare payments and more targeted measures for working families announced today will also have a positive effect on redistributing income and in reducing the risk of poverty and inequality.

“Another measure which will positively impact on vulnerable families in Laois is the further increase in the Home Carer Credit of €100, bringing its total value to €1,200 per year. This builds on an increase in last year’s Budget for over 80,000 families where one spouse works primarily in the home to care for children or other dependants.

“The Government is continuing its investment in education, health, childcare and housing. Our recovering economy allows the Government to ensure that people and families here in Laois will experience sustained improvements in their lives.

“The Government is delivering for families and we are giving a little back to those who have had to make sacrifices during what were very tough times for our country. The gains we have made since the dark days of the recession are hard won and they are fragile, especially in the context of Brexit. However we are in a position to protect our economic recovery and use some of the resources it provides to give everyone here in Laois a fair chance, and the opportunity to reach their full potential," concluded Minister Flanagan.