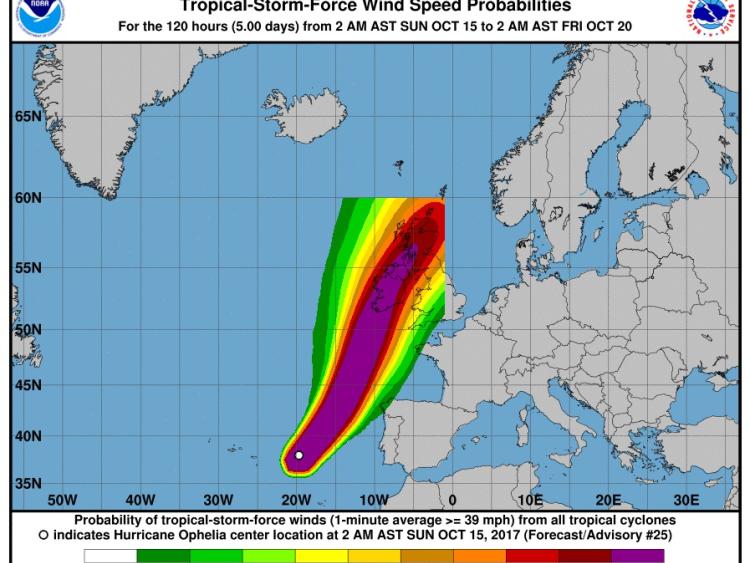 In preparation for the arrival of the storm Laois County Council's Extreme Weather Local Coordination group was convened under the chairmanship of Laois County Coucil Director of Service Kieran Kehoe.

The Council's chief executive John Mulholland attended the meeting as the did council staff and officers from Laois Fire and Rescue Service and Laois Civil Defence.

As a result of the meeting the Fire Service, Civil Defence, council management and staff are now on standby to respond to the arrival of the storm and any emergencies that need to be dealt with.

Laois is one of the counties that has been put under the second highest level of alert - Orange - by Met Éireann but the situation is being updated and monitored on an ongoing basis. The Red Alert was extended to Waterford and Wexford this morning meaning forecaster expect the storm will also have a big impact on the east of the island.

As with all local authorities, Laois has a Major Emergency Plan. This will be activated if an emergency is declared in the county.

The Co-ordination group will meet again on Monday morning to assess the situation locally and to decide if an emergency has to be declared. They will be joined by Gardaí and the HSE to review the situation and decide on who to respond.

Laois County Council will issue updates through its' website and social media platforms.

• All unnecessary travel should be avoided on Monday while the storm is passing.
• Very strong winds are predicted making driving conditions hazardous, especially for the more vulnerable road users, e.g., cyclists, pedestrian’s, motorcyclist and high sided vehicles. Road users should pay particular attention to the risk posed by fallen trees and flying debris.
• Given anticipated weather conditions, tomorrow should be no bike day.
• Power outages are likely to occur in certain parts of the country, with contingency planning activated by the ESB. The ESB is advising the public to stay away from fallen cables that may have broken due to the high winds. ESB Emergency Services can be contacted at 1850 372 999
• Bus Éireann’s schools transport services will not be operating in counties covered by Red level warnings. Because of the duty of care owed to children and to avoid the risk arising from travelling, the Department of Education and schools is instructing all schools to act on the Departments advice. Crèches and Montessori facilities should also remain closed tomorrow.
• People are asked to check in on isolated and vulnerable neighbours today in advance of the oncoming severe weather conditions and again after the worst of the event has passed.
• People are advised to remove patio furniture, rubbish bins and any loose items from around buildings, which can be turned into missiles by the wind.