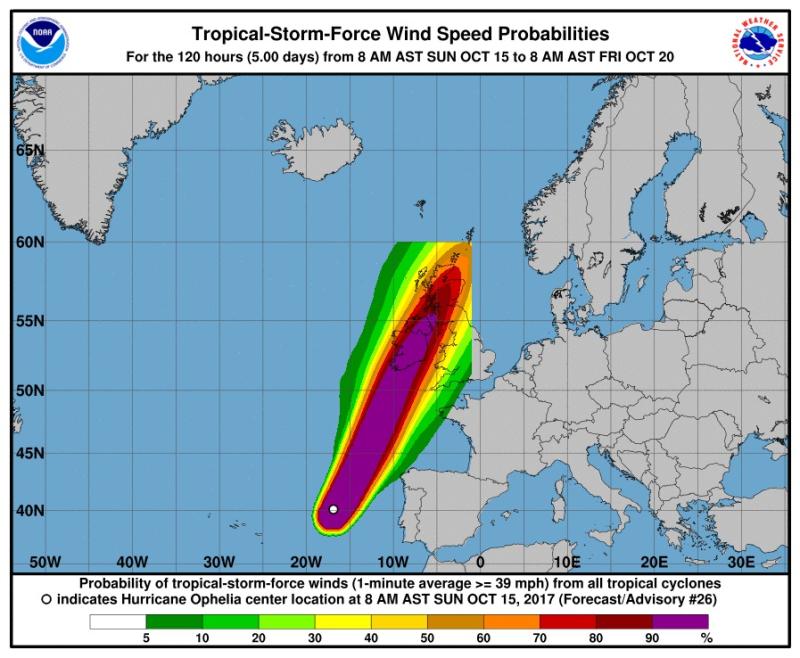 The National Emergency Coordination Group has issued a statement after it met today (15 October 2017) in anticipation of the arrival of Storm Ophelia which is expected to bring 'life threatening' weather.

It is as follows

"The Department of Housing, Planning and Local Government is designated as the Lead Government Department for coordinating the response to severe weather emergencies at national level. The Department’s National Directorate for Fire and Emergency Management (NDFEM) Severe Weather Team has been meeting daily and working with Met Éireann, local authorities and other Government Departments and agencies since Thursday 12 October to review information regarding the storm and its predicted trajectory and intensity.

"Updated information received from Met Éireann on Friday 13 October regarding the trajectory of the storm has identified the issues facing the country as being severe wind, coastal surge and heavy rainfall, with the potential for this to be a life threatening event with the likelihood of significant destruction in worst affected areas.

"This has driven the decision to hold the National Emergency Coordination Group meeting today. The objective of the meeting was to bring all Government Departments together to review and disseminate the latest information regarding the storm, review the current national preparedness arrangements and to formulate public safety messaging in anticipation of the storm reaching Ireland.

"The NDFEM contacted all local authorities on Friday 13 October advising them to activate their severe weather teams. These teams continue to be briefed by the NDFEM regarding Storm Ophelia and continue to prepare for this anticipated wind and potential flood damage through Local Coordination Group meetings".

A Weather Outlook was also issued as follows:

"Monday will see stormy conditions as Ex-Hurricane Ophelia moves up over the country. It is expected to arrive in Kerry for 6am on Monday.  Gale to storm force southerly winds will occur with severe and damaging gusts - winds strongest along southern counties with the risk of storm surge here, along with very high seas.

"Structural damage is possible anywhere and these are life-threatening conditions. Rain will be widespread also, with the heaviest falls likely to occur in Atlantic coastal counties. Localised flooding is possible with thundery falls. The winds will veer southwesterly as the low pressure system tracks northwards over western parts of the country. Highest temperatures will range 15 to 19 degrees Celsius.

"The storm front will track northwards on Monday night, exiting Irish coastal waters before midnight. Rain will gradually become confined to the west Connacht and west Ulster coasts and it will become dry in many parts with clear spells. Strong to gale force and gusty southwesterly winds will gradually abate.