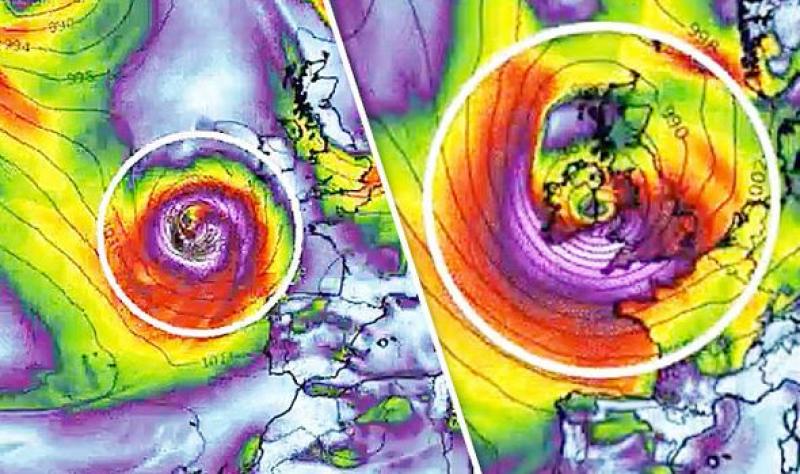 The forecaster has upgraded STATUS YELLOW warning to STATUS ORANGE for parts of the country which it expects will be worst hit by this weekend's weather which could be come what is known as a 'weather bomb'.

In Galway and Mayo northwest winds will reach mean speeds 65-80 km/h with gusts 110-130 km/h in coastal parts of Connacht with the risk of coastal flooding, as storm Brian tracks Eastwards across central and Southern parts of Ireland.

The alert has also been upgraded for Wexford, Clare, Cork, Kerry and Waterford. West to Southwest winds veering Northwest will reach mean speeds of 65-80 km/h with gusts 110-130 km/h in coastal parts of Munster and coastal parts of Wexford with the risk of coastal flooding, as Storm Brian tracks Eastwards across central and Southern parts of Ireland.

A SATUS YELLOW Wind Warning REMAINS in place for Ireland as West to Southwest winds in Southern parts becoming Northwest generally countrywide will reach mean speeds up to 65 km/h with gusts up to 110 km/h at times.

The UK Met Office has issued a Yellow alert for the same a spell of strong southwesterly winds on Saturday. It has warned of some transport disruption and short term loss of power and other services is also possible.

A yellow rain warning is already in place for Thursday, October 19 for a number of counties on Laois border. The rainfall warning is for: Munster, Dublin, Carlow, Kildare, Kilkenny, Louth, Wexford, Wicklow and Meath.

Heavy rain is expected with accumulations between 30 and 50 mm possible. The warning is valid to almost midnight (11.59pm) on Thursday 19 October.