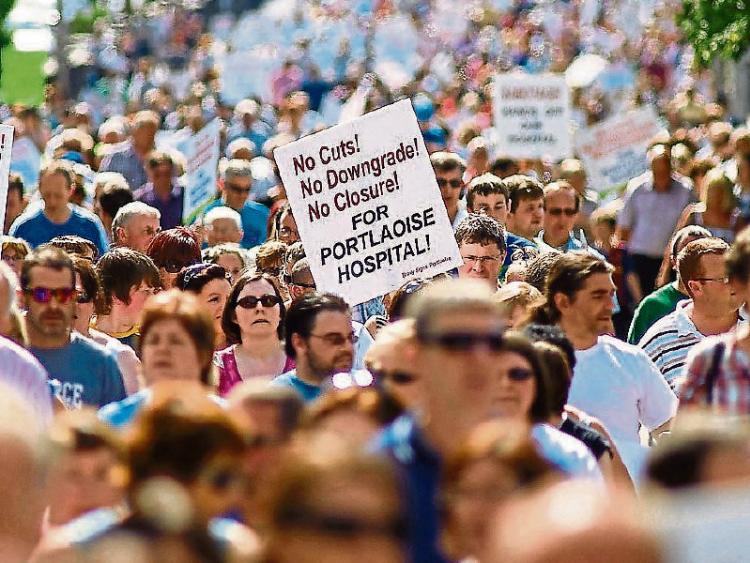 The HSE's management group that oversees hospitals in Laois, Offaly, Kildare and Dublin has refused to comment on the leak of its own report which has huge consequences A&E and other services to the people of the four counties.

The Dublin Midlands Hospital Group (DMHG) submitted revised plans for Portlaoise and other bigger hospitals in its area to the Minister for Health Simon Harris in late 2016.

Since then neither the Minister or the DMHG has commented on its contained. Both parties have also refused to publish the plan despite numerous requests.

Now the so-called Strategic plan has been leaked to Laois Sinn Féin TD for Laois Brian Stanley. He claims it recommends that the A&E will be removed from Portlaoise while Naas General emergency could also be bypassed. FULL STORY HERE.

Asked for a response, the DMHG continues to treat the process as confidential. It issued a one line response to the Leinster Express but did not deny the report.

“We do not comment on any plans that remain unpublished," said the single line statement from the DMHG.

The DMHG has previously said that it would consult with the public on the plan's implementation and not on its recommendations.

Dep Stanley also claimed that a meeting of management from Portlaoise, Tullamore, Tallaght, St James and Naas hospitals is imminent to discuss the execution of a plan.

The Minister for Health has the final say on what happens to Portlaoise and other hospitals. Under health legislation the HSE does not have the power to proceed with downgrade without it being cleared by Minister.

The Minister has yet to give the plan his backing in public despite having the report for more than a year.

The DMHG's Chief Executive Dr Susan O'Reilly has previously said that any changes will be carried out in line with the best clinical advice and with patient safety as the priority.

The first steps to downgrade Portlaoise date back 2011 when the Fine Gael Labour government gave the green light to remove A&E from a number of small hospitals.

This led to the resignation of the now Government minister, Denis Naughton, to resign from Fine Gael because of the loss of emergency services from Roscommon Hospital.

Momentum gathered pace to downgrade for a second time after the crisis that engulfed the Portlaoise maternity unit in 2014. This led to a report from Hiqa, the health watchdog, which made many negative findings about the safety of services. It recommended that the HSE produce a plan for Portlaoise.

The DMHG say the subsequent plan is now with the Minister.