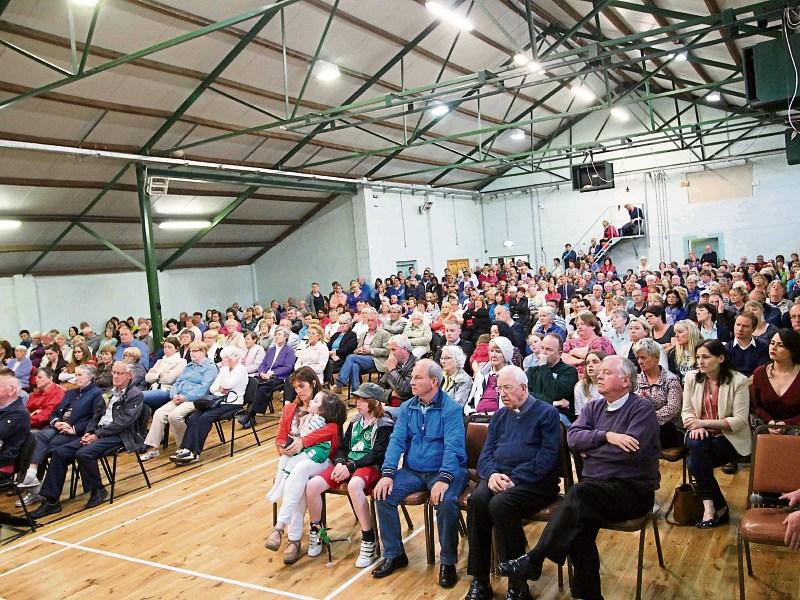 Public meeting in support of Portlaoise hospital held in 2016.

Laois family doctors have launched a scathing attack on HSE's Dublin Midlands Hospital Group management after the leak of a report which confirms plans to downgrade Portlaiose hospital and make other dramatic changes to hospitals in Dublin, Kildare, Offaly and Laois.

A statement issued by the Laois GP group to the Leinster Express says doctors are not surprised by the contents of the report leaked to Laois TD Brian Stanley. The Sinn Féin TD has obtained a copy of the report which health authorities and the Minister for Health Simon Harris have refused to publish.

Among the big recommendations is the removal of 24/7 A&E (Emergency Department) services from the Midlands Regional Hospital (MRH), Portlaoise. FULL STORY HERE

While angry at the downgrade recommendation, the GPs are not surprised at its contents but are shocked by management's refusal to engage with doctors or the public.

"We have repeatedly warned of such details. We remain shocked and disappointed that management of the Dublin Midlands Hospital Group did not engage at any point in the development of their plan with local stakeholders or GPs," said a statment.

The repeated an appeal to management and Minister to look at other options. If the leaked plan is proceeded with the doctors believe services for women and children will be cut.

"We believe that this alternative plan could provide a template to sustain services at other small hospital around the country. It is indefensible that management propose to remove services from an area with a rapidly growing population. Their plan will mean the closure of Paediatrics and Maternity at MRH Portlaoise," said a statement.

They reserved their main criticism for the HSE's hospital management that oversees Dublin and the Midlands.

"Dr Susan O’Reilly (DMHG CEO) and her team have so far failed to provide any reasonable justification to downgrade services. Given the current lack of capacity in acute hospitals and the crisis within the emergency departments nationally it is absolutely unreasonable to close services at MRH Portlaoise," the said.

The now Taoiseach Leo Varadkar criticised the 'drift for many years' that had been allowed to happen at the Laois hospital when he visited in 2015.

The first steps concrete steps to downgrade Portlaoise date back 2011 when the Fine Gael Labour government gave the green light to remove A&E from a number of small hospitals.

This led to the resignation of the now Government minister, Denis Naughton, from Fine Gael because of the loss of emergency services from Roscommon Hospital.

Momentum gathered to downgrade for a second time after the crisis that engulfed the Portlaoise maternity unit in 2014. This led to a report from Hiqa, the health watchdog, which made many negative findings about the safety of services. It recommended that the HSE produce a plan for Portlaoise.

The DMHG say the subsequent plan is now with the Minister for Health. Its chief executive has always maintained that any change will be based on the best clinical advice and be in the interest of patient safety.