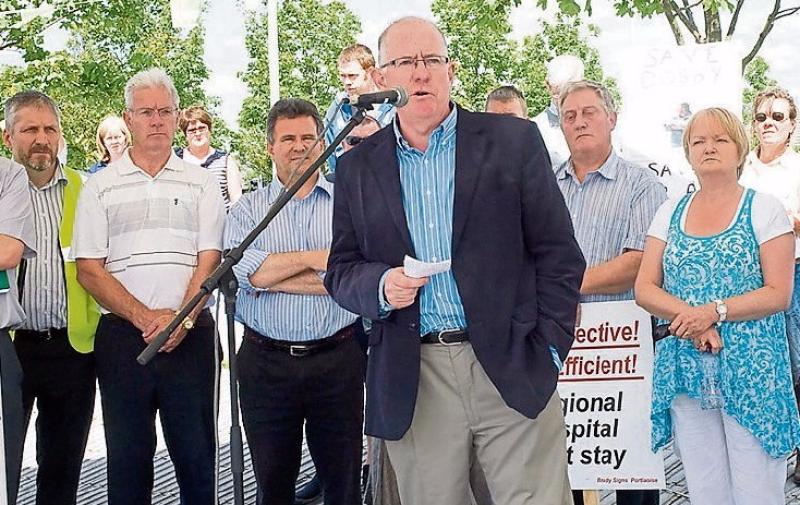 Charlie Flanagan speaks at an anti-downgrade march in Portlaoise in 2011. Pic Denis Byrne

A radical plan for hospitals in Dublin, Laois, Offaly and Kildare should be scrapped according to Government Minister Charlie Flanagan.

The Laois TD was responding to the leak of the Strategic Plan to his Laois Sinn Féin counterpart Brian Stanley TD. Details revealed would involve a dramatic shakeup in hospital services in Dublin and the midlands. Naas and Portlaoise hospitals would be bypassed if implemented.

The contents had been rumoured for some time and Minister Flanagan has opposed the proposal. In a statement to the Leinster Express, the Minister for Justice reinforced his opposition to the plan drawn up by the HSE's Dublin Midlands Hospital Group (DMHG).

"I'm disappointed with reports on the document which I haven't yet seen. I don't support the Susan O'Reilly (DMHG chief executive) HSE plan. Once again The HSE fails the acknowledge the importance of services for the Laois region as they did with Abbeyleix and Shaen (community hospitals).

"Dr O'Reilly and HSE should now reverse engines and scrap the plan as reported and adopt the more realistic and visionary plan drawn up by the Laois medical practitioners who know best," he said.

Laois GPs have said the contents of the plan are 'indefensible'. Minister Flanagan called on the HSE to adopt their plan instead of downgrading the Laois A&E.

"I fully support the (Laois) doctors' plan and I accept that as medical practitioners they know best. In the meantime Government has neither seen nor discussed the reported 'plan'.

"It should be noted that the HSE has not met the Health Minister (Simon Harris) on this. I am in constant contact with both the Taoiseach (Leo Varadkar) and Minister Harris and I have told the HSE that what's reported will not work," he said.

The Fine Gael Minister called on Dr O'Reilly and her team to visit Laois as she promised. He said she should meet with councillors and stakeholders in the county as she has not done to date.

The HSE does not comment on hospitals overseen by the DMHG. The group had no comment on the leak which also revealed that nearly 40,000 go through Portlaoise's A&E in a year.

The DMHG, Minister and HSE have refused to publish the report. The man requests included one made through the Freedom of Information Act by Dep Stanley.

The Minister has the report since late 2016. An original draft of the plan was completed by the autumn of 2015.

In the past the DMHG has said that any changes would be based on the best clinical advice and in the interest of patient safety. The group has previously confirmed that it has drawn up a plan that is with the Minister. It came about as a result of the crisis in maternity services. The DMHG says services for pregnant women are now safe.

The future of Portlaoise hospital was the biggest issue in Laois during the General Election of 2016.