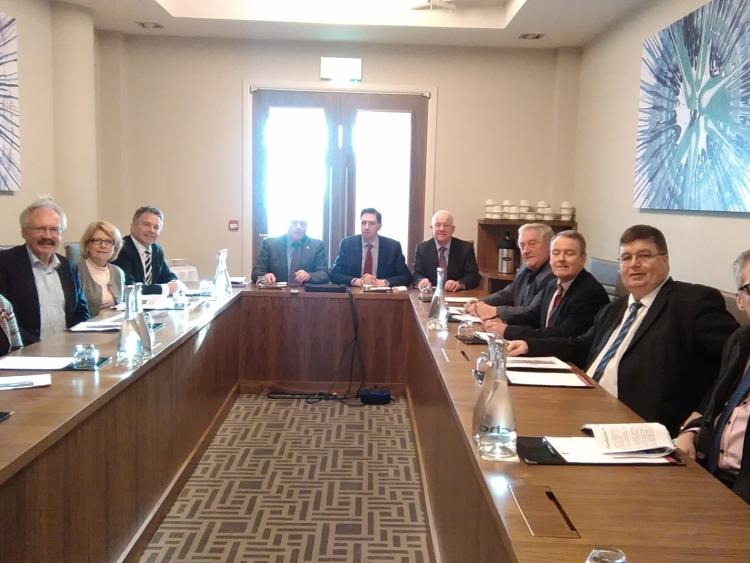 Minister Simon Harris at the meeting in Portlaoise in January 2017

An agreed position on the future of Portlaoise hospital has not been reached with Dublin and Midlands hospital management, according to the Minister for Health Simon Harris.

The Department of Health issued the reply on behalf of the Minister to the Leinster Express following the leaking of a plan to downgrade Portlaoise hospital and remove its A&E.

The proposal is contained in a leaked five year Strategic Plan for hospitals in Dublin, Kildare, Laois and Offaly which are overseen by the HSE'S Dublin Midlands Hospital Group. Managers in the group are due to meet this week to sign off on the plan.

The strategy is linked to another document on the future of Portlaoise hospital completed by the DMHG and submitted to the Minister in late 2016. This was a revised version of an earlier proposals completed in the Autumn of 2015 when the current Taoiseach Leo Varadkar was health minister.

Minister Harris claimed no decisions have been reached.

"The Dublin Midlands Hospital Group has been working for some time on a draft plan for a new model of clinical service delivery at Portlaoise Hospital which takes account of the need to develop services at Portlaoise in the context of developing the model of service provision for the entire Hospital Group.

"The draft plan has been submitted to my Department and it is being reviewed in detail. Once there is an agreed position on the draft plan, there will be further engagement with all interested parties to ensure that the needs of patients, staff, the local and wider community are addressed," he said.

Laois councillors and TDs met Minister Harris behind closed doors in Portlaoise earlier this year. At the time he told politicians including his Ministerial colleague Charlie Flanagan that downgrade was not a  done deal.

They also met Taoiseach Varadkar in Dublin during his time as Minister. He also visited Portlaoise twice in the wake of the crisis that engulfed the maternity services. Interview with Leo Varadkar

The Minster for Health has the final say on what happens to Portlaoise.