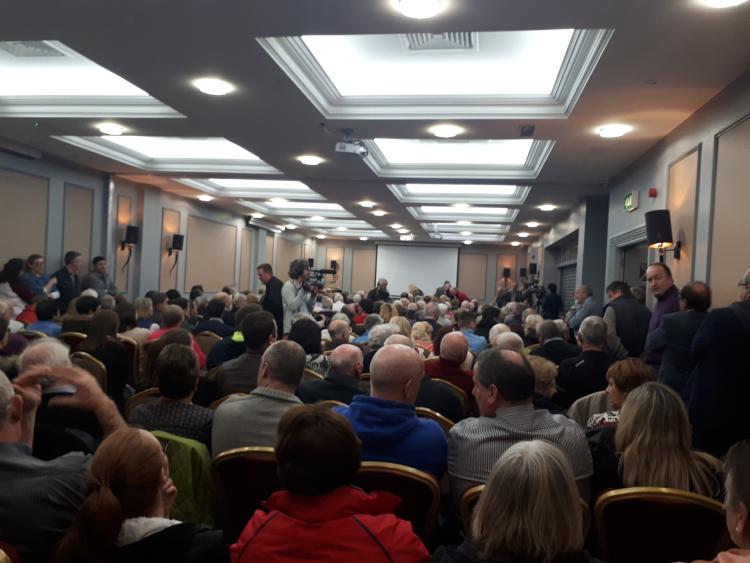 Brian Stanley spoke at the emergency public meeting to discuss the future of Portlaoise Hospital.

He said political pressure is the only way to stop the downgrade of Portlaoise Hospital services.

"It has been raised in the floor in the Dáil. We have tried to keep it up there. We have been pressing to try and get the contents of the plan with no avail. It is a terrible situation to be in. Last weekend I was contacted by a concerned citizen who showed me this strategy.

"Priorities on page 43 of the strategy are clear.  The cover letter with the plan describes it as the final draft strategic plan that's what it says in the letter, I saw the letter. It was to be formally signed off today.

"A similar plan is with the minister for a year now.

"The contents are simple. You are going to have a GP referred medical assessment unit, GPS are already under pressure and there are limitations to assessment units.

"12/7 injury unit. They are limited. Tullamore and Tallaght to be expanded. 40,000 presentations to Portlaoise hospital last year. 20,000 up to June this year. The numbers are escalating because the population is escalating.

"A trauma bypass for Naas. I asked people who work in hospital service. That means serious accidents won't have an A&E unit between Dublin and Limerick, it is there in black and white. Can you image the situation with ambulances stuck in traffic jams with critically ill patients from Camross, Ballylinan, Rathdowney and all over Laois.

"You have women coming here from Offaly and South Kildare. Local doctors have made clear if you cut out the emergency unit you will also lose out on other key services.

"The only people who can stop this is the government. The Cabinet can stop this. The only way this can be stopped is for political pressure to be turned up to boiling point.

"This has been one of the bug bearers, a thorn in our side. We need certainty on this, clarity and an action plan. We want the government to bring forward a plan, a plan to upgrade there can be no downgrade. People like Dick sydes have spent their life fighting for this.

"We need to nail this for good to upgrade it," he said.