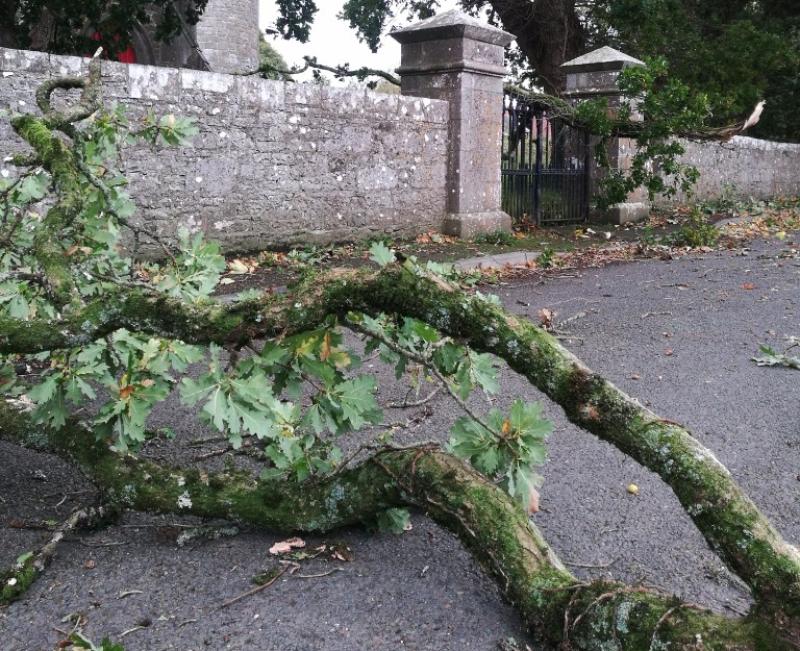 The efforts of volunteers and emergency workers alongside the obedience of the public to stay indoors 'save lives' when Hurricane Ophelia hit Laois.

That was the conclusion reached by chief executive John Mulholland during a recent meeting of Laois County Council where a report on the storm's impact and how the council and emergency services reacted were outlined to public representatives.

Work began ahead of the storm's arrival. The day before Ophelia hit on Monday October 16, road crews had cleared gullies and readied equipment and sandbags. The council initiated its Emergency Local Coordination Group, which met every two hours on Monday for updates.

“At peak on Monday evening there were 37 recorded locations of roads blocked by trees / overhead lines. Current estimated overall approximately 80 trees were down on public roadways,” the CEO John Mulholland reported.

The evacuation of an area was considered during the height of the storm.

“A tree fell and punctured a gas tank. It could have meant an evacuation but it was cleared during the height of the storm,” said Michael Rainey from Laois County Council.

At 5.15pm Laois Gardaí patrolled main roads across Laois on a “reconaissance mission”, he said.

“That helped us to clear main routes and worked extremely well. At 7pm the Civil Defence cleared towns. Crews were out until 11pm and re-mobilised with outdoor crews at 6.30am on Tuesday. Crews worked all day,” he said.

He thanked all council staff, roads crews, fire and emergency services, Civil Defence, Gardaí, the media and the public for heeding warnings to stay indoors.

Laois CEO John Mulholland also praised all involved, as well as businesses who got their staff to exit towns early

“I think it saved many injuries if not lives in the county and across the country,” he said.

Overall there were 230 incidents recorded by Laois County Council’s call centre. They involved trees down, roads blocked or partially blocked, ESB cables down, Eir cables down and debris on roads.

A surge of incidents were reported on Tuesday morning as people took to the roads and council staff discovered further issues.

“Fire services crews with Roads crews assistance cleared all Priority 1 routes by Monday evening 8pm. Roads crews were on standby for the cleanup operation which commenced at first light on Tuesday morning October 17. By mid-morning on Tuesday there were only two recorded road blockages,” Mr Mulholland said.

“It was a very good outcome for the county. Normal transport resumed quickly, though a number of homes were out of power for some time,” he said.

The highest speed wind recorded near Laois was a 120km/h gust in Carlow, just 10km below hurricane speed.