Journalist Kevin Myers attacks Leo Varadkar and JK Rowling and claims he was ‘punished like a rapist, paedophile or terrorist’ for controversial Sunday Times column 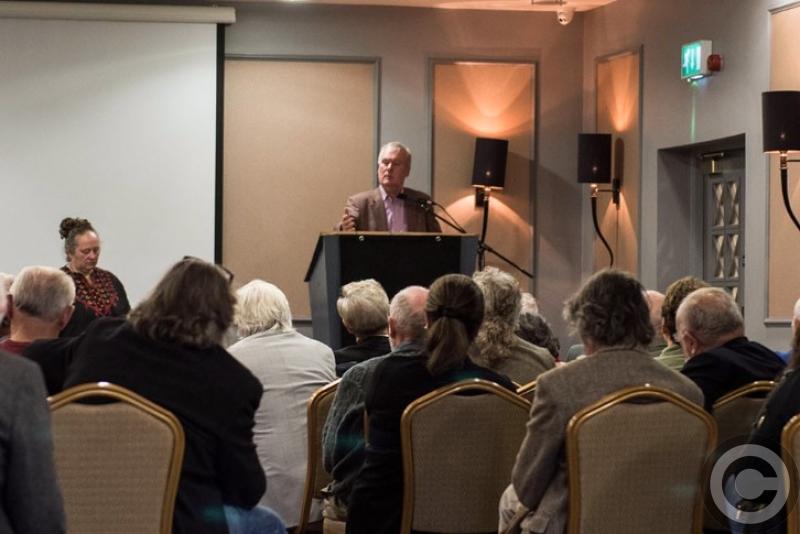 Controversial journalist Kevin Myers has claimed the punishment for writing the Sunday Times column that led to his sacking last July was similar to what would be reserved for “a paedophile, a rapist or an unrepentant terrorist”. He has also attacked Taoiseach Leo Varadkar for “applauding” his dismissal.

Mr Myers said he had been severely punished by political correctness and claimed his right to freedom of expression “died” when he was dropped by The Sunday Times just hours after it published a column on gender pay gaps which was was heavily criticised for being anti-Semitic. He subsequently apologised to BBC presenters Vanessa Feltz and Claudia Winkleman.

Speaking at the event at the Midlands Park Hotel in Portlaoise, which was supported by the Leinster Express as media partner, Mr Myers said: "In my particular case my freedom of speech died on the morning of Sunday, July 31 on the foot of an admittedly poor column that I had submitted to the Sunday Times.”

He said that at 12.20am that morning the article was accessed online in London and "systematically misrepresented". "It was immediately labelled in the twitosphere as toxic anti-Semetic rant. That went around the world in an hour or two and by 3.30am in the morning my career as a journalist was over while I slept and you slept.

"At 4am in the morning the editor of The Sunday Times was woken up and took down my column online and that pretty much was that. Anybody who knows me, such as the Jews of Ireland, knows that I am not anti-Semitic and I am and remain a firm friend of Israel.

"That made no difference to the two newsrooms - the RTÉ newsroom who know me and the BBC newsroom who don't know me. But I was the number one item on the news that day in Ireland and Britain. RTÉ made no attempt to contact me to find out what I thought about what was going on.

"They were content to repeat the lies that I was an anti-Semite. Across the world that day I was the number one news story, even though North Korea had fired a missile the night before. My admittedly poor column became an excuse to destroy me.”

Mr Myers said the attacks went global after some famous people seized on his comments.

"That day, JK Rowling, who has 15 million followers in America, joined in the internet lynch mob. One of her followers was Chelsea Clinton. She too has millions of followers. We have an exponentially growing campaign against me describing me as what I am not.

"This is the kind of punishment you reserve for a paedophile, for a rapist, for an unrepentant terrorist. There was, of course, no process, no due process, no enquiry, no phone conversation, nothing. I was fired for all time.

"This naturally was picked up by the newspapers of Ireland and the vilification and false creation of an entirely mythical Kevin Myers was reinforced by the toxic lies on the internet.”

Mr Myers said he agreed to be interviewed on RTÉ because he did not wish to stay silent: "Now when there is a lynch mob abroad you can either stay silent or choose one platform to speak on. By this time a lot of people were asking me to speak on radio or television. I chose Sean O'Rourke [the RTÉ Radio 1 presenter].

“I appeared and thought I didn't do a bad job and the Jews of Ireland, the Jewish Representative Council, came out in my support. I thought the combination of the support of the Jews and my appearance on Sean O'Rourke might help. Not at all.

"Fintan O'Toole, who attacked me in The Irish Times one day, responded to the Sean O'Rourke interview with another vicious attack on me.

"But perhaps the worst damage, came from the Taoiseach [Leo Varadkar] and Tánaiste [Frances Fitzgerald]. When I thought I was steadying the ship, the Taoiseach not merely applauded my dismissal but by extension, he applauded my being banned for the rest of my life by the Sunday Times without any due process, consultation and without even a single phone call.

"There is no recovery from this kind of behaviour. There is no freedom of speech when, as Eoghan Harris pointed out the following Sunday [in the Sunday Independent], if the Jews of Ireland do not think I am an anti-Semite, who is anyone else to say I am an anti-Semite? But that didn't prevent the anti-Semitism thing from going around the world," he said.

The 70-year-old author went on to argue that another attack was mounted against him which, he believed, was motivated by a bigger agenda.

"There wasn't enough strength in the entirely false anti-Semitic allegation to sustain campaign against me. So what do we next? We go for the anti-women thing, the misogynist line. This is part and parcel of the current non-debate where you are in conflict with political correctness.

"There is no evidence against you - that is fine. You call somebody a misogynist, or an Islamophobe or Xenophobe or a bigot or a racist. No evidence is required. Those words alone, uttered with sufficient vehemence and frequency on the internet, will destroy your reputation - and that is what happened to me.

"I was getting emails from around the world saying what on earth is this Kevin Myers that they've never heard of. This anti-Semite," he said.

Mr Myers also told his Portlaoise audience about the support he received following his removal as a columnist: “I can tell that the first words of support that I got were from women. One woman I had met twice on my life sent me a cheque for €1,000 to pay for a legal action which she thought was inevitable against The Sunday Times and which I thought was inevitable against The Sunday Times, because I had been traduced by this lifetime ban broadcast across the United Kingdom. Number one item in the news that day and the next day.

"Once the Taoiseach and the Tánaiste were seen on television denouncing me and applauding my lifetime ban, my legal advice was that I had no recourse to legal action. I was silenced for all time, not just as a journalist but also as a litigant," he said.

"On the internet, using a certain search engine, LexisNexis, people combined sentences from the 1980s with the 1990s with the noughties to compile a composite picture of me which was entirely false but which they could draw on documentary proof as to the truth.

"For example, I have said of Travellers - I had said in an opening paragraph of a column that I had written in 1999 in The Irish Times - that Travellers were dirty, disreputable, unkempt, addicted to alcohol.

"My next paragraph was, ‘You didn't like that, did you? You're not meant to like it. This is what [Friedrich] Engels said about the Irish working class in the 1860s.’ What he said about the working class Irish is that they were living in such conditions, because they had been oppressed by bad government, by landlords.

"And I said of the Travellers was that they too had been a victim of bad government and injustice and discrimination. That was the second paragraph. The second paragraph did not appear in the internet version, only the truncated first paragraph, so it made me look like an anti-Traveller bigot," he said.

Mr Myers also claimed that the Newstalk broadcaster George Hook was “duly destroyed” by the “politically correct brigade” who had targeted himself. He claimed journalists who wanted to destroy him were “destroying freedoms”.

"There isn't a newspaper who didn't want to destroy me. There is not one newspaper with which I could comfortably work. I can name a couple of journalists who stood by me, but, for the most part, most journalists want to destroy the thing that makes their trade possible and that is freedom of the press, freedom of expression, freedom to offend people, freedom to be wrong, freedom to be be in error. If you live in a terrible era you will never say anything.”

"All these councils and quangos are paid for by the State. The National Women's Council, the Rape Crisis Centre all have individual good functions to do but they extend their brief to make sure there is no departure from their norms.

"What journalist would risk enduring the fate that I have endured? What journalist would ever sensibly look at George Hook and say that'll take risk on this issue of sexual violence? Nobody will. The outcome is destruction of the very freedom that makes journalism, interesting, viable and useful.

"Mainstream media are terrified of the power of the internet by people tweeting, by JK Rowling or Chelsea Clinton and their vast followers. In a tweet you cannot convey a complex message. All you can convey is a headline.

Mr Myers said he believes Ireland has gone back in time, with a new voice replacing that of the Catholic Church.

"We are back to the 1950s. One voice is allowed in Ireland. It is not the voice of the Catholic Church any more; it is the voice of political correctness, braying most loudly and most of all in the pages of The Irish Times, but also braying in the Irish Independent, frantically trying to catch up with what The Irish Times is doing.

Frank Fitzgibbon, editor of The Sunday Times in Ireland, declined to comment on Mr Myers’ claims.