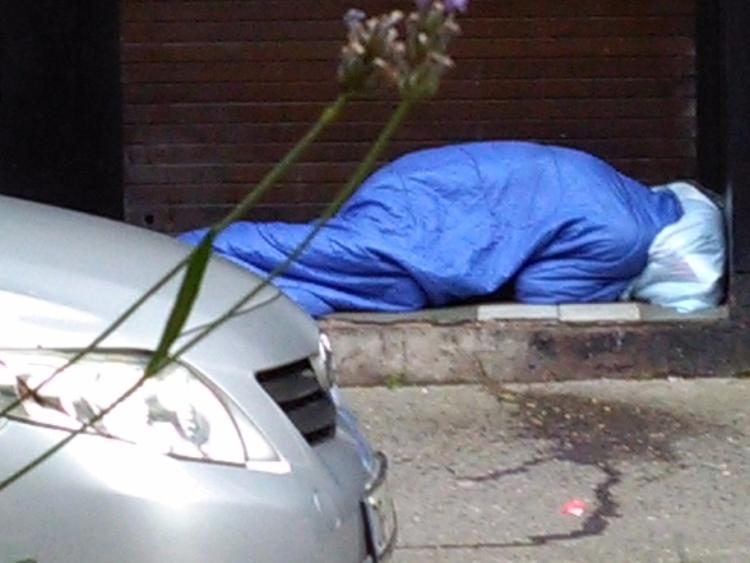 A homeless father and son in Laois have been sleeping in a car for two weeks after they could not stay in emergency accommodation they have said was sub-standard.

The man and his 17-year-old son have nowhere else to go after they exhausted all of their options couch-surfing and in emergency accommodation since they became homeless in August this year.

The man who wishes to remain anonymous became homeless after the cost of his rent shot up in Portlaoise and he was no longer able to afford it after living there for seven years.

He approached the Leinster Express in October when his emergency accommodation, provided by local authority, came to an end and he did not know where to go.

After this, he was offered emergency accommodation in a B&B in Laois which was on the same premises as a pub and which he said had strong smells of mould, chemicals and sewage.

He said that the shower facilities in the B&B did not work correctly and his son’s mental health was suffering as he was embarrassed going to school with the smells from the B&B on his uniform.

The man said that if he was on his own he might have suffered through the poor conditions of the B&B however his son found it difficult to live there.

The man’s son is 17 and in his Leaving Cert year. His mental health is suffering as a result of being homeless. The son recently had a GP appointment in order to come to terms with his mental health. This has resulted in involvement from social workers.

The Educational Welfare Officer for the Child and Family Agency TUSLA wrote a letter to Laois County Council on September 7 on this man’s behalf as a child is involved.

In the letter the Welfare Officer outlined that the current homeless situation the man and his son were facing was “seriously affecting” the son’s education in his Leaving Certificate year.

It stated that the secondary school he is attending has committed to trying to support the son in any way they can. It also said that the pair were “very distressed” during the meeting. The Education Welfare Officer asked that the situation be resolved as soon as possible as it was “detrimental” to the boy’s education.

A letter written by a representative of the secondary school involved states that the boy did not return to school for his 6th year studies “due to the unfortunate circumstances of finding himself homeless”.

It said that “it is vital that X has appropriate accommodation to help and support him in his academic studies in his Leaving Certificate Year”.

The man has said that Laois County Council have now said that they can no longer do anything for them because they refused to stay in the B&B that was in poor condition.

This is the third option that Laois County Council has offered them. The first option was a B&B in Longford, they would have had to move school and town which they felt was not possible.

The second option was a B&B in Mountrath which they stayed in for a month and they were happy there. This was the most stability they had since they had to move out of their long-term home in Portlaoise.

The third options was this sub-standard accommodation which they tried to stay in for a week but they found unbearable.

Now, there are no more options for this family and they continue to suffer by sleeping in cars and on friend’s couches.

The man said that Laois County Council referred the case to housing managers but they have been waiting two weeks for an appointment to speak with the Housing Officer, sleeping and living out of a car in the meantime.

The Leinster Express has tried to contact Laois County Council but no one was available to speak and no messages or emails were returned.

Read more about this family's experience with homelessness which was covered by the Leinster Express at the beginning of November by clicking here.