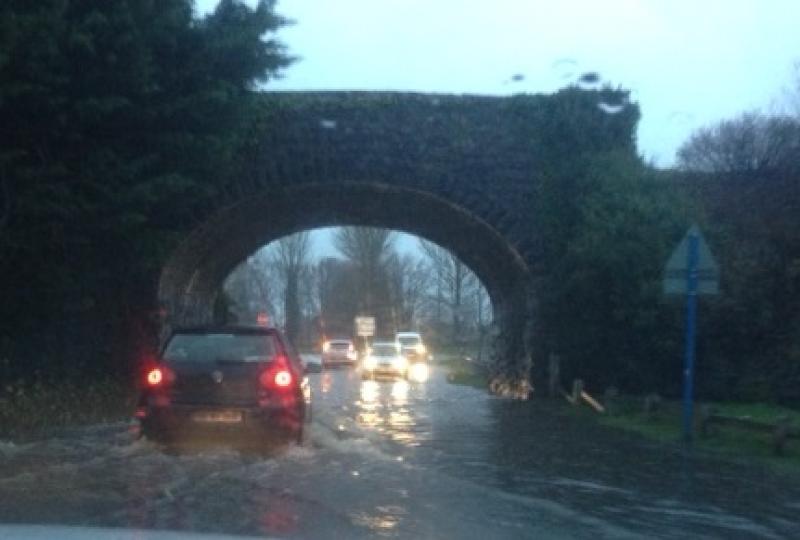 Floods under the Derrycloney bridge in Mountmellick this morning

The heavy rainfall that was forecasted by Met Eireann has hit Laois hard overnight, with surface floods on many roads causing difficulty for morning commuters.

Laois Fire & Rescue Service are attending flooded roads in Portlaoise, Portarlington, Mountmellick and Mountrath, with drivers advised not to drive through floods if at all possible.

There are houses flooded in Mountmellick and Portlaoise, and a public premises on Portarlington Main Street is also currently being pumped out by fire crews.

The Clodiagh River in Clonaslee has burst its banks and has flooded main road through the middle of the village. The river at Tinnahinch Bridge has also burst and there is flooding in the area.

Laois Civil Defense and Laois County Council staff are helping Laois Fire and Rescue Service to deal with flooding around the county.

"Avoid the Rosenallis to Clonaslee road because there is substantial flooding on it. Generally road conditions will be poor all day with more rain falling. Drive appropriately, there is a potential for sliding. Take no chances with floods on a road, because all you can see is the surface, you don't know what's underneath," he said.

Our photo shows the Derrycloney Bridge in Mountmellick, where one car is understood to be now stranded at the scene due to rising floods.

A Status Yellow Rainfall Warning remains for Munster and Leinster until 9pm tonight, 30 to 40mm of rain were predicted. That is to be followed by freezing temperatures and possible snow showers.

Met Éireann says Wednesday night will turn cold everywhere as temperatures fall to near freezing in the early part of the night, lowest overnight temperatures zero to plus 3 degrees, coldest in the north.  See story here.

AA Roadwatch have also warned drivers to slow down.

"It's a very wet start across the country, with flooding & surface water in many areas. Slow down and leave plenty of time for your journey".