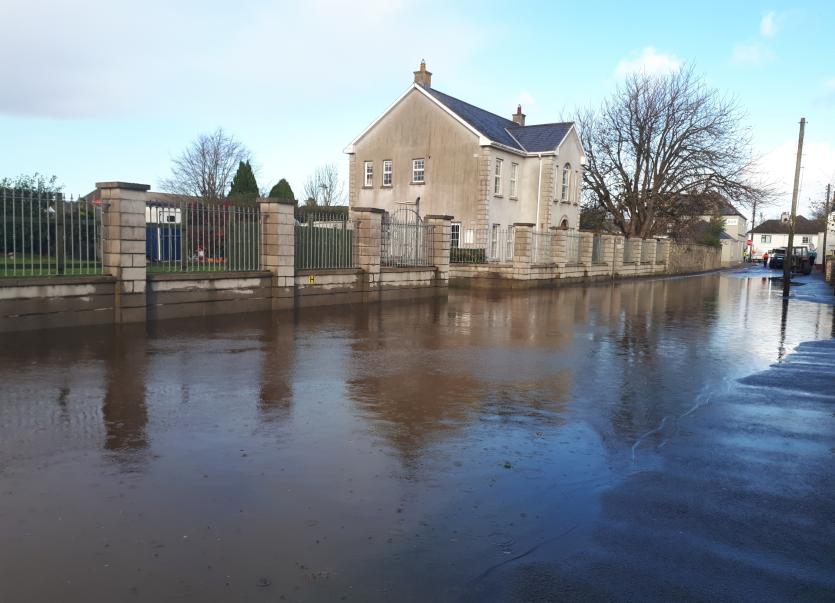 Manor Road in Mountmellick was badly hit by flooding.

A flood risk river survey carried out by Laois County Council reveals that an almost blocked up River Barrow could be one of the reasons as to why Mountmellick and Portarlington flooded.

In 2016 the Leinster Express revealed details of a survey carried out by Council engineers on the River Barrow. The River Owenass, which broke its banks and flooded Mountmellick, flows into the Barrow on the Laois Offaly border not far from Portarlington.

The Barrow flows through the middle of Portarlington which flooded partially in recent days. Both rivers rise in the Slieve Bloom Mountains and flooded thousands of acres of farmland in recent days around both towns.

It had been speculated that Hurricane Ophelia and Storm Brian were factors in the floods due to trees and other debris blocking three rivers around Mountmellick. The investigation has yet to start.

However, a survey carried by the Laois council revealed that the River Barrow was getting silted up and almost blocked at its slowest moving point just downstream of Portarlington.

The Leinster Express revealed that survey of the River Barrow completed in July 2016 revealed that extensive work was needed clearing silt islands to prevent flooding in Portarlington just downstream on farmland along Laois borders with Kildare and Offaly.

The cause of the problem is natural, but lack of maintenance meant that the solution will be costly and take time. It would also involve the co-operation of three county councils, multiple agencies and Government Departments.

However, the total cost of clearance work was likely to run much higher than this as substantial work would also have to be carried out in Kildare and Offaly. Those counties were also preparing reports in the hope of getting the money needed from the Office of Public Works.

The Laois survey was completed first. The subsequent report said the natural cycle of the river is for silt and debris from the Slieve Blooms to be carried down along the river and be deposited at its flattest points. However, the catchment area north of Athy covers 400,000 acres but is “extremely flat” making it prone to flooding, says the report.

“The catchment area upstream of Athy suffers severely from flooding, this can be accounted for due to insufficient falls and restricted channel capacity,” said the report.

The council's engineering section undertook an on-site survey of 13 miles of the river in June 2016 after the wet month of May. It found that while parts of the river are quite wide, “substantial deposits of silt” are in places “restricting the channel greatly”. There are also overhanging trees both big and small which cause problems.

In some places, the silt islands are almost blocking the river. The survey points out that that the river around Portarlington in Laois is not as wide in this section but there is “quite a lot of side vegetation and trees overhanging, and also parts of the river banks have slipped away.”

The report points out that the stretch around Port is prone to flooding with waters remaining for up to ten days.

“Maintenance work on the River Barrow is a continual task and commitment for the neighbouring counties of Laois Offaly and Kildare.

“Once funding is approved any proposed work will have to be approved by the National Parks and Wildlife Service and the Fisheries board.

“Work will be done from the beginning of July to the end of September in any given year,” said the survey.

Laois County Council had met with the outside agencies and agreement will have to be reached with all sides before work begins. Council staff believe the carrying out of the work depends on funding from the OPW. This is unlikely to be allocated until all councils have plans in place to address problems.

It is not clear what progress has been made since 2016.

FLOODING SHOWS LAOIS DOES NOT EXIST