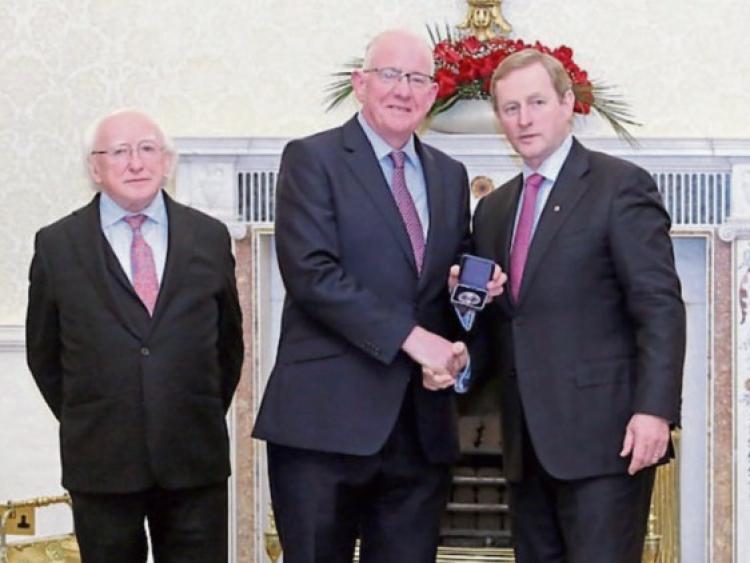 The controversy which the Laois TD Charlie Flanagan has found himself at the centre of is not the first time the Flanagan family have had a brush with State tribunals and inquiries.

Minister Flanagan's political rise is also related to justice and garda controversies but his family have also have a life and death link to the Gardaí.

In 1947, his father Oliver J Flanagan, then an Independent TD for Laois-Offaly, was at the centre of controversy when accusations of were levelled against members of the Fianna Fáil government - including Taoiseach Éamon de Valera, Minister for Justice Gerald Boland and Minister for Industry and Commerce Seán Lemass.

The company secretary at Locke's wrote to Oliver J with concerns over the proposed sale to a foreign syndicate. Dep Flanagan raised the issues in the Dáil in 1947. A subsequent tribunal sat for 18 days and rejected nine of ten allegations.

In 1975, when Minister Paddy Donegan switched departments following the "thundering disgrace" controversy in 1976, Oliver J, succeeded him as Minister for Defence in Liam Cosgrave's government.

Charlie was elected when retaining the Laois Offaly seat in 1987 after his father stepped down due to ill health.

He was among the favourites to become justice minister until he backed Richard Bruton over Enda Kenny in the run up to the 2011 election.

He was chairperson of the Fine Gael parliamentary party from June 2011 to May 2014. After being left out in the cold by the by now Taoiseach Enda Kenny, he was promoted to cabinet following the resignation in May 2014 of Alan Shatter as Minister for Justice and Minister for Defence in the wake of the Guerin Report on Garda malpractice allegations. Mr Shatter was subsequently exonerated.

In the reshuffle that followed, the Laois TD was appointed as Minister for Children and Youth Affairs to succeed Frances Fitzgerald who assumed the Justice portfolio.

In July 2014 he became Minister for Foreign Affairs and Trade, succeeding the former Labour leader Eamon Gilmore. He was reappointed to Ivy House after the 2016 election by  Mr Kenny.

When Leo Varadkar became Taoiseach in June 2017, he moved Charlie Flanagan to the Deparment of Justice in place of Ms Fitzgerald who stayed on as Tánaiste. There was talk at the time that another politician refused the job.

Mr Varadkar said at the time that Minister Flanagan would have two key tasks including Garda reform.

"The Minister, Deputy Charles Flanagan, will serve in the Department of Justice and Equality where his key tasks will be to continue to reduce crime, to pilot the Judicial Appointments Commission Bill through the Dáil and to drive reform and culture change in An Garda Síochána," Mr Varadkar told the Dáil.

Fianna Fáil leader Micheál Martin questioned this appointment. He said Minister Flanagan had done a good job in Foreign Affairs particular in relation to Northern Ireland and should have been allowed to continue.

Minister Simon Coveney, who had just been defeated by Mr Varadkar in the Fine Gael leadership election, took over from Minister Flanagan with Brexit topping his agenda.

Next month in Templemore, Minister Flanagan is due to be present Scott Medals for bravery to four retired Gardaí and the family of a dead garda who was murdered by the IRA in a bomb attack in Laois in 1976. The injured survivors and the dead garda were investigating a threat to the life of Oliver J.

Jim Cannon, Tom Peters, Ben Thornton, Gerry Bohan and the late Michael Clerkin were blown up when they called to a house on the Laois-Offaly border at Garryhinch, Portarlington in October of that year.

It was not until Minister Flanagan took over in Justice that the medals were confirmed.