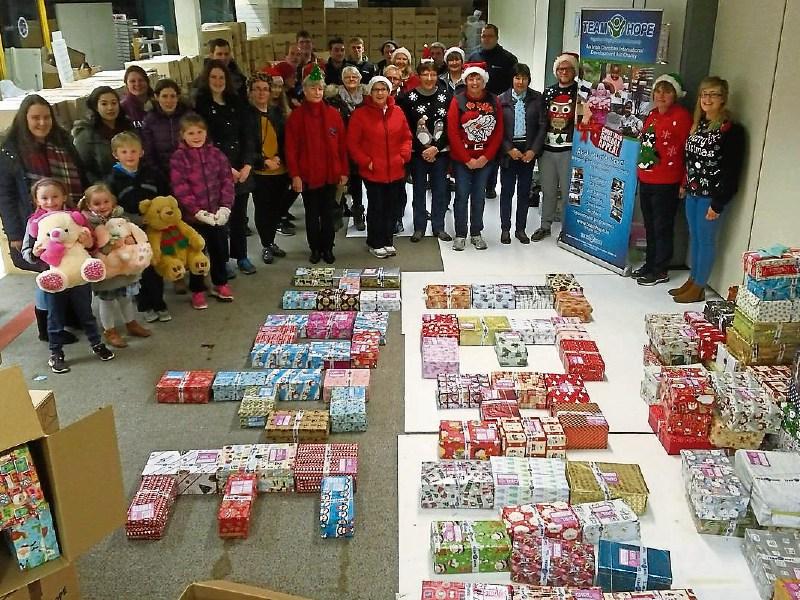 On a cold frosty night last Tuesday over 40 Laois Team Hope volunteers were busy packing 5,430 shoeboxes with Christmas gifts donated by the people of Laois for poor children in Hunedoara, Transylvania in Romania.

People buy gifts for a child who is struggling with poverty and social exclusion in Eastern European or African countries.

The gift-wrapped shoeboxes were labelled boy or girl with a suitable for age written on the cartons that were donated by An Post.

Teddies for Tragedies members in Laois knitted teddies throughout the year to include in any shoeboxes that didn’t already contain a cuddly toy.

Orla Doyle from Durrow, Dorothy McDowell from Mountrath and Mary Siney from Ballinakill are co-ordinators for the annual shoebox appeal in Laois.

“A small group of us got together and we took over from the previous co-ordinator Tanya Thompson three years ago.

“The majority of schools and crèches throughout the county got involved along with the Irish Countrywomen’s Association, Active retirement groups, Teddies for Tragedies, the transition year students from CBS Portlaoise and the Laois Macra Na Feirme.

“We are overwhelmed by the generosity of the people of Laois and wish to thank everyone so much for their kind donations.

“These gifts reach the neediest of children, some in orphanages and hospitals who don’t have anything. They bring an awful lot of joy to the children who receive them.

“Our interpreter at the time was about 20 years old and she had a pair of gloves on her hands that she had received in a shoebox when she was 12 years old.”

“We organised a table quiz in Kavanagh’s in Portlaoise around October and we raised €600 for the shoebox appeal.

“This was used to buy extra items to add to the shoeboxes.

“We are delighted with the success this year and wish to thank everyone who donated and volunteered in any way.

“Also we wish to thank Andrew Shaw for giving us the use of Centrepoint in Portlaoise where we carried out all of our packing.

“It doesn’t cost very much to make up a shoebox but it is invaluable to the child that receives it.”

Mary Siney said that an enormous amount of community spirit created a wonderful atmosphere in the warehouse and everyone was really happy in their work.

“When you do something good like giving to others you get a fantastic feeling yourself.

“Every shoebox had to be opened and checked and liquids like shower gels and shampoos had to be removed. Items like these have to be taken out and are then repackaged for homeless people.

“Nothing goes to waste. Other things like anything with a military theme including toy soldiers can’t go either as the country that the boxes are going to could be war torn.

“We got around 1,500 dollies and teddies throughout the year from the SVP shop in Abbeyleix cleaned them up, they turned out great.

“Then a ladies knitting and crocheting group in Abbeyleix made clothes for them. “The children will be so delighted when they open the boxes from Laois,” she said.